Stella's Lofty Purpose (And Scandal) - Blanchard and Company
My Account 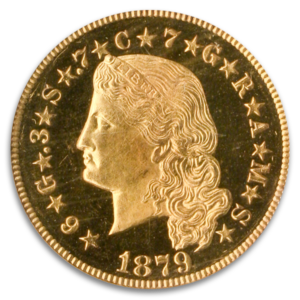 If you’ve ever traveled abroad, you understand the hassle that comes with changing currencies.

Kasson, a congressman from Iowa, was appointed as the Envoy Extraordinary and Minister Plenipotentiary to the Austro-Hungarian Empire. In his foreign travels, Kasson lamented the difficulty in exchanging U.S. currency abroad.

The $4 gold Stella coin was his proposed solution.

Who knew then, a coin with such lofty international commerce goals would fall victim to scandal. We’ll explain more about that later…but first let’s explain the significant goals.

After the Civil War and the Panic of 1873 eased, the American economy was strong and international trade was increasing at a steady rate. As more and more Americans traveled abroad for business and pleasure, a solution was needed to convert U.S. currency easily overseas.

Kasson advanced the idea of the $4 Stella as a path forward toward joining the Latin Monetary Union (LMU) – a partnership between Belgium, France, Italy, and Switzerland. Through the LMU, foreign currency was easily exchanged between member nations.

The U.S. mint developed a pattern coin – that was never circulated –as an example for U.S. Congressman as they debated the opportunity to join the LMU.

The fascinating and highly coveted $4 gold coin was nicknamed Stella – as the Latin word for star is stella.

The beautiful gold coin features a five-pointed star on the reverse. The Stella pattern was only minted in tiny amounts in 1879 and 1880 in two types.

Two of America’s most famous coin designers created these patterns:

Today, these coins are extremely rare and in high demand as an example of America’s outstanding numismatic art. And, then, there’s the scandal too.

Only 437 Stellas were minted in 1879. They were struck for the Congressman to review and consider the proposal.

Stellas Were Spotted In the Most Surprising Places

Yet, shocking to many, these handsome gold coins were popping up as medallion necklaces hung on madam’s bosoms in high-end brothels in Washington D.C. known to serve illustrious clientele – like U.S. Congressman.

These brothels were famous for large oil paintings, fancy red plush parlor furniture, pricey European carpets, and real silver on the table alongside porcelain dishware. Guests and residents feasted on gourmet meals including high and mid-priced cuts of beef, pork and goat, alongside exotic items for their day – like coconut and Brazil nut. Expensive French champagne was ever-flowing.

There was outrage in the numismatic community, as none of these special coins were offered for sale to the public – at any price. Yet, Washington’s most famous madams proudly flaunted these exceedingly rare coins. Even today, some Stellas can be found that reveal traces of the necklace loops…

Congress ultimately rejected the idea of an international coin and Stella, struck for only two years, was never a circulating coin.

Notably, because the coin goals were international commerce, the obverse states its metallic content in the metric system.