Storms, Treasure Hunts, and the Panic of 1857 - Blanchard and Company
My Account

In 1857, the S.S. Central America left the Panamanian port of Colón, sailing for New York City. 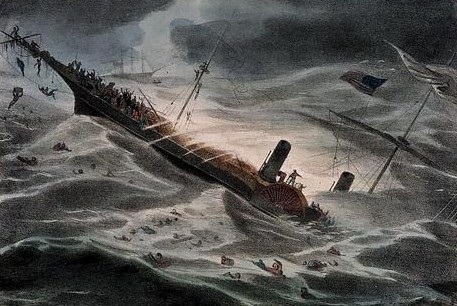 The crew braced for a category two hurricane off the coast of the Carolinas. Winds exceeded 100 MPH. In the dark of the night, the ship sank killing 425 people. A few survivors remained afloat in lifeboats and were rescued. Onboard were 15 tons of Federal gold totaling nearly $300M in today’s value.

The lost gold represented enough value to incite what came to be known as the “Panic of 1857.” It was considered the first worldwide financial crisis. It was a time when people first recognized that economies around the world were increasingly connected. New York banks, anticipating the arrival of gold from the S.S. Central America, started to falter once the news of the sinking came to light. The recovery would not occur until after the Civil War.

Approximately one month after the sinking, at the depth of the crisis, banks began suspending payments which escalated fear into panic.

Onboard the Central America were thousands of gold coins. More than one hundred years would pass before they were found. Researchers used complex modeling based on Bayesian statistics to locate the sunken treasure. In 1988, with the help of a remotely operated vehicle, researchers recovered an estimated $100-$150 million in gold. One ingot, weighing 80 lbs, was later sold for $8M. At the time it was recognized as the most valuable piece of currency in existence.

Today, the recovered coins of the S.S. Central America are among the most desirable for collectors. The coins are known for their rich detail and almost pristine condition after surviving for so long in the depths of the ocean.

This level of detail is considered rare among coins coming from the San Francisco mint formed in the late 1800s. In their first year, they converted $4 million worth of gold bullion into coins. However, in 1906 a fire broke out.

The $300M held within represented a third of the United States reserves. Fortunately, they made a full recovery and reopened without damage to the gold. In later decades production was suspended as the Philadelphia mint took on more work. However, the San Francisco mint continued to strike supplemental coinage through the years. Dollars from the mint carry a mint mark “S” representing their origin. In recent years the mint has produced various commemorative coins.

The journey of these coins touches on so many chapters of our nation’s history from the disastrous sinking of the S.S. Central America to the panic of 1857. These coins are a way to hold some of the most incredible stories you never knew from our nation’s past. The coins reflect more than the rich yellow and gold colors for which they’re known. They reflect a history that’s still being written.