“Thar’s gold in them thar hills!” - Blanchard and Company
My Account

Or rather, “There’s millions in it!” (Doesn’t have quite the same ring, does it?) 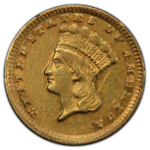 It turns out that “Thar’s gold in them thar hills!” is a Hollywood western invention, by way of Mark Twain.

In 1829, the Georgia Gold Rush started. Thousands of miners flocked to the area—and Dahlonega, Georgia, quickly became a gold-rush boom town. But then in 1848, gold was discovered at Sutter’s Mill in California, and the Georgia gold miners started pining yonder, since most of the easy gold was already gone from the Georgia rivers.

Dr. Matthew Stephenson wasn’t having it.

Stephenson, assayer of the Dahlonega Mint, climbed the courthouse steps one day and speechified thus:

“Boys,” he asked, “why go to California?” He pointed at a mountain. “In that mountain lies more wealth than you’ve ever dreamed possible, there’s millions in it!”

“There’s millions in it!” (The good doctor repeated.)

His saying became famous … because the miners took it to California with them. Anytime one of them was ready to give up in despair, the cry “There’s millions in it!” from a fellow forty-niner would revive him.

Mark Twain got wind of this while visiting a mining camp and used the phrase in one of his books. The phrase went viral nationwide and in about the 1930s, it morphed into a movie-ready “Thar’s gold in them thar hills!”

In any case, the gold in them thar Georgia hills was plentiful, and the Dahlonega Mint minted it.

The Confederate Congress closed the mint in June 1861, and the mint never resumed operations. In all, the mint was in operation for only 23 years. All of its coins are rare, and the NGC has recorded only seven MS63 1858-Dahlonega $1 gold coins.