The 1715 Spanish Treasure Fleet: A Coin from the Watery Depths - Blanchard and Company
My Account

The men had just had two days of calm seas. But it wasn’t to last …

A strange swell appeared in the sea, silent and unsettling. The sea birds vanished. 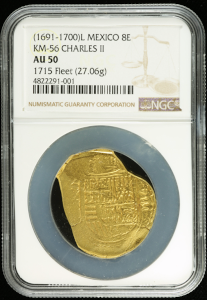 The swell grew; cargo rolled in the holds; and for the 1,000 men sailing the 11 ships of Spain’s Treasure Fleet, the night passed uneasily.

In the morning, the sun never seemed to rise. By noon, visibility was so poor that the convoy of ships lit lamps to guide each other. In the afternoon, the wind came; and by nightfall, a hurricane had struck.

The fleet scattered, each ship alone in the screaming wind. And then the sailors saw them: the breakers on the coral reefs that line the Florida Coast. The men started to pray. The priests started to say Hail Marys.

And then the first ship hit the reefs.

Only a few men survived that night, and it’s from them that we have this tale.

In the morning, wreckage and bodies were scattered across 30 miles of uninhabited coast—and the search for treasure began. For the next four years, the Spanish braved sharks, barracudas, and buccaneers to salvage what they could of the treasure, but a hoard’s worth of millions still remained.

There it remained, for centuries, until modern-day treasure hunters found it.

Today that treasure is a time capsule from a bygone era: a time when pirates roamed the seas, and the might of the Spanish Empire spread far and wide.

Today we bring a coin from that time: an 8 Escudo, minted between 1691 and 1700. The 8 Escudo is the crown jewel of all the 1715 Treasure Fleet escudos. It features the Pillars of Hercules above waves, symbolizing Spain’s portal from the Mediterranean to the Atlantic and the wider world. The other side displays a cross, the arms of Castile (castles), and the arms of Leon (lions). Together, this magnificent design represents colonial Spain’s dominion over land and sea.

This coin was struck and trimmed by hand, the magnificent handiwork of an eighteenth-century minter. Gold is impervious to saltwater, so this coin has remained in fine condition.

Want to read more great rare coin stories? Sign up for our newsletter and get our tales from the vault, our favorite stories from around the world and the latest tangible assets news delivered to your inbox weekly.