The 1907 High-Relief Saint-Gaudens: A miniature sculpture in your hands - Blanchard and Company
My Account

When President Theodore Roosevelt set his mind on something, nothing would hold him back.

And one thing he wanted was to improve America’s image in the world. As part of that mission, he decided to send a fleet of battleships around the world to show how powerful our navy was. 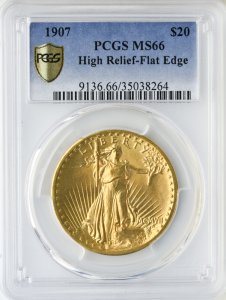 However, there was one problem: “I think the state of our coinage is artistically of atrocious hideousness,” President Roosevelt wrote to the Secretary of the Treasury. In fact, he believed that no coins in the previous 2,000 years had surpassed the beauty and relief of the coins of Alexander the Great’s era.

The Double Eagle quickly ran into some roadblocks. Mint officials were concerned that raising the coin’s figures to the height of the ancient Greek coins would make them unstackable—a necessity for modern banking houses. In striking, the high relief was also a problem: multiple blows from a hydraulic press were required to fully form the coin, greatly adding to the coin’s production time.

The motifs were thus flattened for general production, making the high-relief coins rarer and far superior in the eyes of collectors ever since. Compared to one of the flattened coins, a high-relief Double Eagle is like holding a miniature sculpture in your hand.

Two types of edges were used in creating the high-relief Double Eagle: wire edge and flat edge. The flat-edge variety was created by adjusting the pressure of the mint presses at the end of production, which caused them to be two to three times rarer than the wire-edge variety.

Whichever variety you choose, you’ll be getting a coin struck in beautiful “HD”—all high reliefs were struck at least three to five times.