Soon after World War I ended, the US decided to commemorate the peace that followed with a dollar coin. When it came time to design the artwork officials had the idea to host a competition. Artists could submit designs and a winner would be selected and receive the honor of seeing 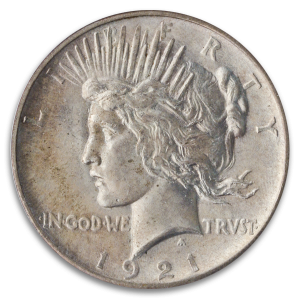 their work on an approved piece of US currency consisting almost entirely of silver. Additionally, the winner would be awarded $1,500 in prize money. The coin was referred to as the Peace dollar.

Italian American sculptor Anthony de Francisci submitted a design which was unanimously selected by the official judges. The win was especially impressive given that de Francisci was the youngest of the artists to enter the competition. He was only 34. His wife Teresa served as the model for Liberty. It was, however, another characteristic of his work that sparked outrage.

To visually represent the theme of peace, de Francisci included imagery of an eagle perched on a broken sword. When the first written descriptions of the artwork were shared with the public many people admonished de Francisci and other officials by citing the work as emblematic of defeat. One editorial, printed in the New York Herald, remarked that “a broken sword carries with it only unpleasant associations.” The author continued, “it is regrettable that the artist should have made such an error in symbolism.”

It is likely that this sentiment was shared by others because not long after the printing of the editorial officials relented and decided to move the broken sword. They did so by hiring another artist to adjust other elements in the design in such a way as to cover the broken sword. To achieve this effect the artist made alterations to the eagle’s talons and the olive branches that were part of the original image. Accentuating these features obscured the parts of the original people believed to be defeatist.

Eventually, the design earned approval and in 1921 the US Mint struck over one million pieces. The coin was eventually released to the public in early January of 1922 with a composition of .900 silver and .100 copper. In time, the mint in Denver and in San Francisco issued additional pieces along with the Philadelphia mint. In 1922 alone, the total combined issuance of these three mints was 84 million pieces. By 1928 the mints ended their issuance of the Peace dollars.

However, in 1934 the US resumed minting the Peace dollar. This resurgence was the result of a newly passed Congressional act which mandated that the mint would purchase bulk quantities of silver which, at the time, could be bought at record low prices. As a result, between 1934 and 1935 the US mint struck approximately seven million additional Peace dollars.

Today this single coin represents so many aspects of American culture. It represents the ambitions of a young Italian American, a celebration of peace, and the ingenuity of the mints that were able to issue such vast quantities.