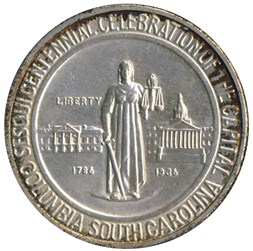 After the end of the American Revolution, the state capital of South Carolina – Charleston at the time, was considered vulnerable to attack by sea, and also too far from the magnificent plantations and agricultural lands that were being developed throughout the state.

In 1786, they named Columbia, alongside the Congaree River, the new state capital of South Carolina. This made Columbia one of the first planned cities in the country.

In order to finance extensive celebrations of the 150th anniversary of the founding of Columbia in 1936, the Columbia Sesquicentennial Commission asked Congress for permission to strike commemorative coins. The Act of March 18th, 1936 authorized the striking of a commemorative silver half dollar. However, the celebration which took place March 22-29, 1936, began less than a week after the passage of the commemorative coin bill. That meant no silver half dollars would be on sale at the event for the fairgoers.

The Sesquicentennial Commission chose a local artist – sculptor A. Wolfe Davidson from Colombia’s Clemson College to design the coin.  Davidson’s initial designs were rejected by the committee, which held the coin to exceedingly high standards.

In the end, the Commission of Fine Arts collaborated with the artist to make major changes to the coin design before his models were finally approved in July 1936.

The obverse of the coin reveals a full figure of Justice. She is flanked on the left by the Old State House and on the right the new State House, with the years 1786 and 1936 etched below. The motto LIBERTY stands above the Old State House. The coin is encircled with the inscriptions: SESQUI CENTENNIAL CELEBRATION OF THE CAPITAL and COLUMBIA SOUTH CAROLINA.

The state symbol – the palmetto tree dominates the reverse of the coin. The magnificent tree stands triumphantly above a broken limb of an oak. That symbolizes the rich history of the South Carolina’s strong palmetto trees – which formed the walls of Fort Moultrie in Charleston and held back gunfire of the British navy’s ships built from oak.

Around the tree, 13 stars are featured, highlighting South Carolina’s unique status as one of the original 13 colonies and states. The reverse is inscribed with E PLURIBUS UNUM, to its right IN GOD WE TRUST. The words UNITED STATES OF AMERICA and HALF DOLLAR encircle the coin.

Comprised of 90% silver and 10% copper only 9,007 of this gems were struck. These commemorative coins were apparently handled with care as many specimens have few marks or abrasions.