In 1688, the city of New Rochelle, New York was founded by French Protestants. Colonist Jacob Leisler executed the formal agreement when he purchased 6,000 acres from Sir John Pell who originally owned the land. In return for the acreage that represents the city today Pell required “one fatt calfe” on 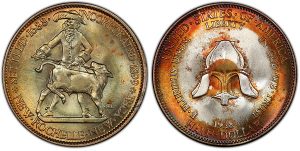 the following year and every year after.

More than two hundred years later the Westchester County Coin Club began to rally interest in having a 250th anniversary coin minted. Their thinking was that selling such a coin would generate the revenue necessary to host the anniversary of New Rochelle. Raising the funds this way meant they would not need to rely on tax income from citizens already suffering financially from the Great Depression.

By January of 1936 a bill calling for the coins was drafted and introduced into Congress. The bill, which authorized a mintage of 25,000 pieces, passed without debate in March of the same year.

The design perfectly tells the story of New Rochelle’s humble beginnings with a roped calf in the care of a man designed to resemble John Pell. The designer, Gertrude K. Lathrop, relied on portraits of Pell which he accessed through Pell’s descendants. The reverse of the coin shows a fleur de Lis which is a symbol found on the coat of arms for New Rochelle. The decision to include the fleur de lis was also inspired by the French city of La Rochelle which features the symbol on its coat of arms.

The final design received much praise for its authentic depiction of the history behind the town. Moreover, critics cited the artist’s ability to include many visual elements in a single coin without resorting to a cluttered, over-designed piece.

By April of 1937 minting began. The Philadelphia Mint produced just over 25,000 coins, reserving the additional pieces for assessment purposes. The coins were made available to the public for $2 each at stores and through the mail. As planned, the profits from the sale of the coins funded the anniversary celebration for the city which occurred in June of 1938. The coin has steadily climbed in value over the decades with one selling for $3,593 in 2006.

While the coin lives on in the collection of numismatists across the country, Pell’s calf agreement finally came to an end during the American Revolution. The agreement was briefly reinstated for ceremonial purposes only in 1988 during the city’s 300th anniversary. During the celebration the stubborn calf refused to be led to the stage. Four men finally succeeded in pulling the animal out. After this brief appearance the calf was allowed to return to its home on a farm in Granite Springs in Westchester County.