The 1954 Franklin Half Dollar - Blanchard and Company
My Account

The Franklin Half Dollar carries a sense of irony with it. The very person it depicts, Ben Franklin, would have likely objected to the idea of his profile on a piece of currency. He was accustomed to seeing living royalty on coins and he certainly did not see himself as a royal figure. 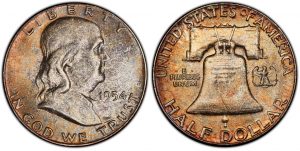 Moreover, the small image of an eagle on the reverse would have angered him. He saw the eagle as a weak image given their tendency to scavenge. Franklin’s choice for the national bird was a turkey.

The coin was originally conceived in 1947 when Mint Director Nellie Tayloe Ross requested a design featuring Franklin. Sadly, the designer died that same year leaving the reverse imagery incomplete. Soon after, new chief engraver Gilroy Roberts took over and eventually added the small eagle as an unplanned extra flourish. As it happened, this addition was, in fact, required because the Coinage Act of 1873 mandated that any coin with a value greater than a dime must include the eagle.

The official release date of the coins was set for April 30th, 1948 to coincide with the anniversary of George Washington’s 1789 inauguration as President. The coin was minted in small quantities in the initial release due to an abundance of Walking Liberty half dollars in circulation.

Today, the coin is a popular entry point for those starting a collection because there are only 35 different dates and mintmarks in the series. As a result, it is relatively inexpensive to collect the entire set.

One particular piece that stands out is the 1955 “Bugs Bunny” minting. The coin earned this name after an obverse die and a reverse die clashed causing the profile of Franklin to appear as though it had buck teeth. The error is small and only visible under close inspection.

Over the years officials made some minor revisions to the design. For example, in 1958 and 1959 the number of long tail feathers on the eagle were changed.

The coin consists of 90% silver, and 10% copper. While many pieces were minted the coin has also been submitted for melting in large quantities due to the value of its silver content. The US Mint issued the coin through 1963.

The Franklin Half Dollar is a reminder that historical figures are sometimes memorialized in ways that are always in line with the preferences of the person being honored. While collectors have long valued the coin and the skill of the designers it is likely that Franklin would have found the entire project ironic.