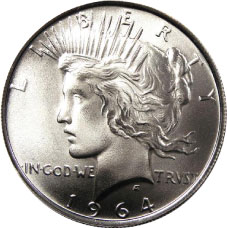 In 1918, Senator Key Pittman of Nevada championed the Pittman Act. The intention of the Federal law was to convert 350,000,000 standard silver dollars into bullion. To fulfill this mandate the Government purchased approximately 209,000,000 ounces of silver from American mines. This massive haul of silver would become the basis for a series of coins minted from 1921 to 1928, then once more between 1934 and 1935.

Officials wanted a unique design for the coins that would convey a theme of peace. After holding a design contest artist Anthony de Francisci became the winner for his profile image of the Goddess of Liberty and bald eagle with an olive branch on the reverse. This design was met with greater public approval than the first design which included the image of a broken sword. This original design was thought by many to appear as an image of defeat.

By 1928 the mint had fulfilled the requirements underpinning the Pittman Act. However, new legislation ushered in a new period in which additional peace dollars were minted between 1934 and 1935. Then, the coinage of the peace dollar ended. That is, until the turbulent era of the 1960s came roaring forward.

The price of silver started to climb. Banks began to feel pressure as demand for silver coins grew. In response to demand, the 1964 Congress approved a measure to produce 45 million silver dollars. The order came from President Lyndon Johnson despite opposition from other government officials. Production began the following year.

The peace dollar was back.

However, in late May of the same year, Congressional leaders successfully moved to cancel the minting. The new directive to melt the coins proved difficult. In an effort to accelerate the process, the mint decided to ensure all coins were accounted for by using weight measurements rather than the longer process of counting all the coins. This method may also have been preferable given that the coins never reached circulation and therefore were entirely within the confines of the US Mint.

In time there have been rumors that a few precious coins escaped destruction. In fact, mint records reportedly claim that two test strikes surfaced belonging to a set of 30 test pieces that were part of an inspection batch originally sent to Washington. The two coins were retrieved, then placed in the Treasury Vault until 1970. Then, they were destroyed.

The history and rarity of the coins has inspired some to produce fraudulent counterfeit pieces. In the meantime, the US Mint has responded stating that it is illegal to own even a real 1964 Peace dollar.