The Seated Liberty images were one of the most enduring in the history of US coinage. This design appeared on the half dime, dime, quarter, and half dollar between 1836 and 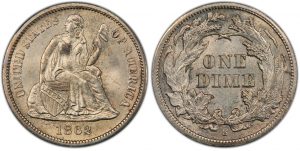 The design was the work of Mint engraver Christian Gobrecht. He served as the third Chief Engraver from 1840 to 1844. His engraving work started before he was employed by the Mint. Originally, he engraved ornamental clocks. He was a pioneer in his field and invented a medal ruling machine which reproduces relief on smooth surfaces in 1810. He also improved upon the camera lucida, the pump organ, and even a talking doll.

Gobrecht’s first attempt to become chief engraver of the Mint was unsuccessful. He wrote to President James Monroe requesting the position but was denied. Eventually he was appointed “Second Engraver” in September of 1835 after the Chief Engraver, William Kneass suffered a stroke. Five years later Kneass passed away and Gobrecht was appointed Chief Engraver.

His Seated Liberty designs for which he is remembered were based on sketches by portrait painter Thomas Sully and ornithologist Titian Peale.

The obverse of the 1862-S Seated Liberty half dimes and dimes show the figure of Liberty in a flowing dress seated upon a rock. In one hand she is grasping a Liberty pole with a Phrygian cap perched on top. The cap has long been a powerful symbol of freedom and traces back to the Neoclassicism movement. The cap also represents the pursuit of liberty.

The figure has her right hand on top of a striped shield inscribed with the word “Liberty.” This feature of the design is meant to represent America’s willingness to fight for freedom. Above her is an arc of thirteen stars to represent the thirteen original colonies.

The reverse side shows the denomination, in this case reading “Half Dime.” Both the 1862 Seated Liberty half dime and dime pieces feature a wreath surrounding the denomination words.  All coins that predate 1860 include the image of laurel leaves which, like the Phrygian cap, are a Neoclassicism inspired image. By the start of 1860 the design was altered to include agricultural products including wheat and corn.

Originally, the Seated Liberty dimes and half dimes contained no stars. This design element was added in 1839.

The Seated Liberty imagery was standard on US coins ranging from half dimes to half dollars until 1879 when the Bland-Allison act significantly reduced the minting of the coins. In time, tastes changed and there was growing support for a new design. Eventually, the Barber Head design replaced the Seated Liberty.

Today, this design remains one of the most powerful images on US coins. It blends an array of images that represent freedom, patriotism, and liberty.

Gobrecht died in July of 1844 but his contribution to US coinage lived on in the Seated Liberty design.