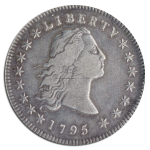 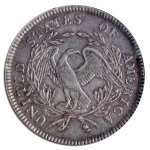 Americans used to use foreign money because we didn’t have our own.

In early America, we had no official coinage, and so we used a variety of foreign coins, including Spanish dollars.

In the 1780s, many prominent Americans began calling for the creation of a national mint. After the Constitution was ratified (giving Congress the power to coin money), Congress began reviewing the country’s monetary system and coinage and deciding what to do next. Treasury Secretary Alexander Hamilton recommended modeling our dollar on the Spanish dollar, and that’s what we went with.

In 1791, Congress authorized a mint. Three years later, engraver Robert Scot began working on the design for the dollar, which had Liberty on one side and an eagle on the other, as mandated by the Coinage Act. Extra care was taken with engraving the dollar compared to other denominations, because the U.S. knew this large coin would be heavily scrutinized when released and used abroad. This coin would represent our fledgling country, and we wanted it to do a good job.

However, the “Flowing Hair” design by Scot was short lived, as there were problems with the striking process … and a lack of enthusiasm for the design.

It’s actually kind of quaint. A relic of a bygone era, if you will (literally) …

The Flowing Hair Dollar was only minted for two years, making it quite rare.

Each coin in our catalog of rare coins tells its own story. If you want to read more, sign up for our newsletter here!