The Gobrecht Dollar Experiment - Blanchard and Company
My Account

In the 1830’s, the concept of a silver coin for use in circulation was still something of an experiment. The U.S. had not yet had a silver coin minted for the purposes of everyday use by citizens. The Gobrecht dollar became that experiment and by 1835 mint officials were ready to give it a try. 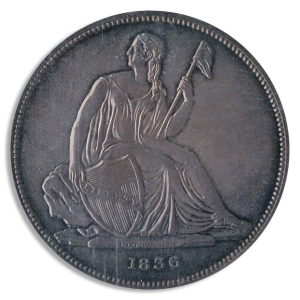 They wanted to see how such a coin would be received by the public. The coin gets its name from Philadelphia medalist Christian Gobrecht, who was hired as a last-minute replacement to fulfill the responsibilities of the engraver. After much discussion among Mint director Robert Patterson and Philadelphia artists Titian Peale and Thomas Sully, it was agreed that the design would feature a soaring eagle.

This choice was partially driven by the urge to differentiate the coin from so many other minted pieces featuring the heraldic eagle. When conceptualizing the look of the coin, Gobrecht and others turned to Peter, the Mint’s pet eagle, as inspiration. Sadly, not long after, Peter became caught in a coining press and died. He was preserved by a taxidermist and remains on display at the Mint today.

Gobrecht was provided with rough concept sketches and tasked with turning those ideas into final etchings. By October of 1835, his copper engravings were complete. This work would be used to generate a series of prints to be distributed to government officials for approval. Soon after, Gobrecht and others received the authorization to move forward and begin creating the dies. Soon thereafter,  Mint officials solicited the opinions of the general public.

The following year, Chief Coiner Adam Eckfeldt began striking the production dies. One of the last changes to the piece came from Patterson, who required that the design include “C. GOBRECHT F” to illustrate that Gobrecht was the artist of the work. The first pieces were struck in December 1836.

The design was praised, but many reviewers didn’t like the decision to include Gobrecht’s name and suggested that it be removed. Soon after, even Gobrecht himself requested that his name be removed from the coin. Instead, Patterson decided that Gobrecht’s name would remain but that the size would be reduced and that the placement would change.

As production began Congress started to change the composition standards for silver coins and required that all silver pieces must consist of 90% silver rather than the 89.2% previously required. As a result, 1,000 Gobrecht coins struck in 1836 were 89.2% silver, and 600 were 90% silver. In the following years other design changes would emerge. The 1838 versions removed the stars from the reverse. Some of the coins struck that same year did not include Gobrecht’s initials.

The total minting of the coins throughout their entire run was only about 1,900 pieces. When production ended the Mint began producing the Seated Liberty dollar which used the same obverse design. Today the coins are highly sought after for their unique place in history during a time of transition, as the U.S. Mint was still exploring ways to introduce art into the economics of currency.