What currency should be used in world trade? Over 150 years ago, China and the United States wrangled over that very question – just as they do today. 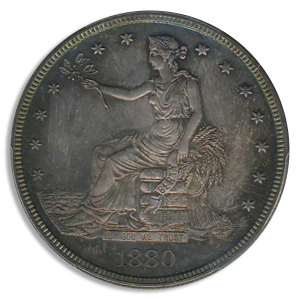 For those of you that don’t follow global economics closely, today, importers and exporters that buy and sell goods across country lines like crude oil, diamonds, cars and vehicle parts and even computers – primarily use the U.S. dollar to complete the transactions. Example: when China wants to buy crude oil from Saudi Arabia – typically those transactions are completed in U.S. dollars. (Although, China is actively exploring alternatives to cut the U.S. dollar out of that picture).

Rewinding history back to the late 1860s and early ’70s, trade between the United States and China was increasing.

Americans were increasingly purchasing and enjoying items like tea and silk from China. However, a threat to this international trade emerged from the unlikeliest of things: the Mexican peso.

It turns out that many Chinese businesses preferred the use the Mexican peso instead of U.S. currency because the peso contained more silver than the standard U.S. dollar. This meant U.S. businesses had to exchange their dollars for pesos every time they wanted to buy tea or silk or other goods from China, which generated high commission fees for U.S. business owners.

The federal government had a solution to this problem: mint a dollar-sized coin known as a “trade dollar” for use in Asian business trade.

To entice the Chinese to use the American Trade Dollar, the U.S. put more silver content into its coin.

The Trade Dollar consisted of 90% silver and weighed slightly more than the peso (420 grains vs. 416). A unique feature of the Trade Dollar is the wording beneath the eagle on the reverse of the coin” “420 GRAINS .900 FINE.” This was included to convince Chinese merchants of its value.

The U.S. minted silver Trade Dollars from 1873 through 1885. During the first two years of production, the United States sent nearly all the minted coins abroad to ease trade problems.

The Trade Dollar was a success in the Orient. Indeed, Chinese businesses took a liking to the coin and preferred its heavier weight over the Mexican peso.

However, mining activity at home altered the course of history for the Trade Dollar. U.S. mines in the western regions of the country were yielding enormous amounts of silver. This influx of precious metal disrupted the supply and demand dynamics in the market. Silver prices plummeted. As a result, the Trade Dollar fell to an intrinsic value of just 80 cents. Soon after, the U.S. saw large amounts of Trade Dollars flow back into the country where Americans spent the coins at their face value. In response, Congress acted and revoked the coin’s status as legal tender in July of 1876. They continued to mint the coin, but only for the purpose of exportation.

Today, the coins are highly sought after by collectors. The 1884 and 1885 trade dollars are considered to be the rarest of these desirable coins.

Are you curious about what this intriguing coin looks like? See an 1880 Trade Dollar here.