Americans had mixed feelings about the $3 gold piece. In the late 1880’s the $3 Indian Princess Head was worth 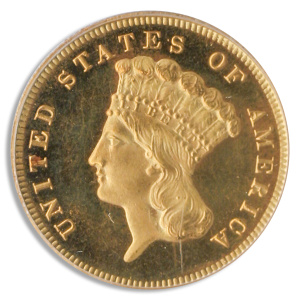 well over a day’s pay.

It turns out that very few people wanted to use coin which did not fit into the already accepted decimal calculations. Even though it was not heavily used in circulation – the $3 gold piece instantly captured the attention of coin collectors.

Numismatists began avidly seeking out and saving the intriguing $3 Indian Princess gold coin as early as 1879.

So why did the U.S. Mint decide to produce a $3 gold coin – especially since they already had a gold quarter eagle worth $2.50?

Numismatists believed that the sole purpose for creating the $3 coin was to create a convenient way for businesses to purchase 100 stamps in a single transaction.

Every U.S. coin denomination has a number of rarities. Yet, the $3 Indian Princess Head, minted from  1854-1889, is packed with so many low-mintage dates that the entire series is considered rare.

Many consider the $3 Indian Princess the most beautiful gold coin struck in the 19th century. See the rich and warm patina that comes with a 141 year old masterpiece here.

He was inspired to feature an “Indian Princess” on the obverse of this stunning coin. A lustrous orange-gold color, the coin shows a gorgeous Indian Princess adorned with a feathered headdress, with the words UNITED STATES OF AMERICA encircling her. On the reverse, the date and denomination is surrounded by an agricultural wreath celebrating corn, tobacco, cotton, and wheat.

This summer we are seeing huge numismatic demand and extremely low inventory levels, which is contributing to rising prices.

In June 2021, the Rare Coin Values Index hit a new all-time record high of 434.28. (The Rare Coin Value Index is based on the combined percent change in retail prices for 87 rare United States coins and is updated monthly.)

Numismatic rarities that come onto the market can sell in a matter of days due to the limited supply and strong investor interest. Long-time numismatic investors are holding and expanding their collections when they can.

Investors are seeking opportunities to diversify their portfolios and protect and grow their wealth through tangible assets like rare coins – that are a non-correlated asset to the stock market. If there is a coin that you seek, call us today. We are often able to source even hard-to-find coins due to our deep connections inside the numismatic community.

1 thought on “The Intriguing Numismatic Theory Behind This Coin”