The 1838 $5 Half Eagle represents one of many designs to a beautiful coin that had a circulation spanning more than one hundred years, between 1795 and 1929. The piece, consisting almost entirely of gold, was originally enacted in 1792 and was the first gold coin issued by the United States. 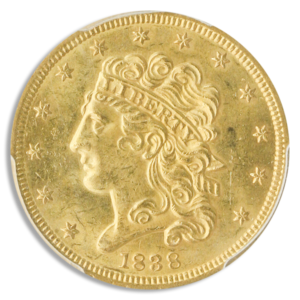 In its first iteration, the coin was composed of .9167 gold, and .0833 copper and silver. The original design was the work of United States Mint Chief Engraver Robert Scot. Scot had his start engraving plates for Virginia currency in the late 1700s. By 1781, Scot moved to Philadelphia to continue and expand his engraving work, eventually completing work for the Superintendent of the Office of Finance of the United States. In fact, some of this engraving work was for paper currency that would eventually fund the Siege of Yorktown. This permanently connected Scot to what would be the last major battle of the American Revolutionary War and a decisive win for George Washington. Scot’s connection to the history of the country’s formation became even stronger when, most likely, he became the engraver of the Great Seal shortly after it was designed for the Declaration of Independence.

Once Scot became the Chief Engraver at the United States Mint, he was asked to design coins for the U.S. that included eagle imagery and were “emblematic of liberty.” The prevalence of his work among items that have become historical cannot be understated. In addition to his coin work and his engraving work on the Great Seal, he also engraved rare stamp dies for each state, the seal for the U.S. Navy Department, and seal dies for the U.S. Department of State.

The original design of the Half Eagle coin was known as the “Turban Head,” and has imagery that is far removed from the 1838 design. Here there is a capped portrait of Liberty facing right and a small eagle is depicted on the reverse. By 1807 the design changed again. This iteration is known as the “Draped Bust” design. One of the several changes was the decision to include a “5 D” on one side of the coin to represent its value of $5.

The next version, which includes the 1838 issue, is known as the “Classic Head” and was developed in 1834. By the time this design took shape the coin’s value was greater than the face value of $5. In response, the US Mint changed the composition of the coin, reducing the gold content to .899 and .100 silver and copper. The weight and diameter of the coin were also reduced. The phrase “E PLURIBUS UNUM” was removed. Before the 1838 version was minted the gold content was changed again, this time increasing to .900.

Throughout its history the $5 coin was popular enough to be the only denomination minted at eight of the US Mints. After the “Classic Head” the “Liberty Head” followed. The final iteration was the dramatically redesigned “Indian Head.”

The coin’s imagery is as enduring as all of Scot’s other work and the evolution of the design is representative of the changing national identity.