The California Gold Rush changed the firmament of American life. Nearly 300,000 people came to the state seeking to stake their claim and pull new found wealth from the ground. However, this adventurous spirit precipitated some serious problems. Many indigenous populations were forced off their lands by opportunistic “forty-niners,” a reference to those flocking to California during the peak of the gold rush in 1849. 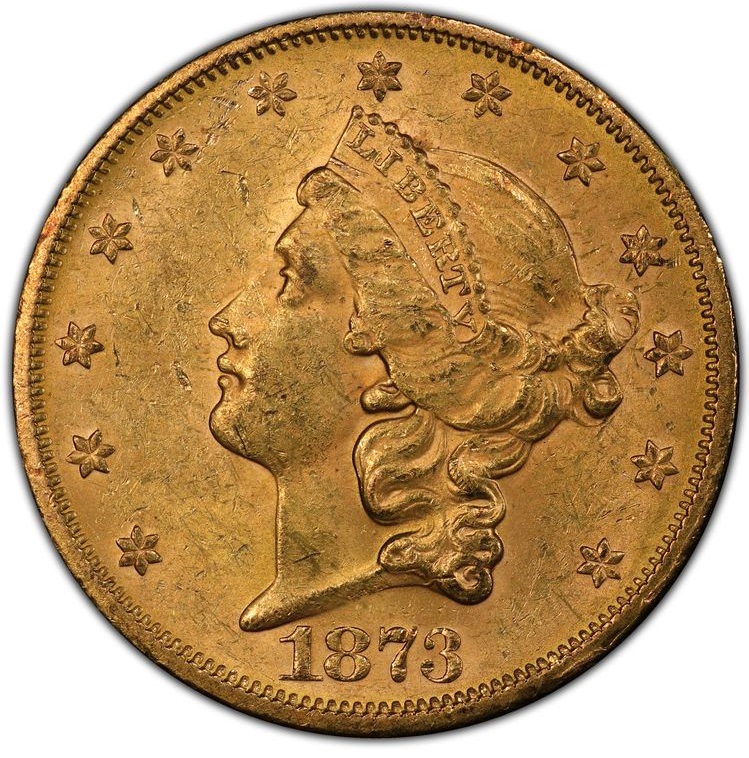 In fact, the gold rush was so momentous that its effects extended all the way to Congress where people like James Iver McKay began to notice that the gold supply in the country was increasing markedly. Eventually, he drafted legislation calling for the issuance of the Liberty Head double eagle coin. The piece was originally intended to facilitate the transfer of large sums between parties.

After considerable collaboration the final design settled on an obverse depicting the head of Liberty. She has thirteen stars surrounding her as a representation of the original US states. The reverse side featured a heraldic eagle with a double ribbon reading “E Pluribus Unum.” As the case with nearly any new coin issuance, the piece was initially met with some dissatisfaction. The Journal of Commerce, for example suggested that the coin should include an image of George Washington and that the eagle should be designed “standing out as if it were not ashamed of itself.” Few hold these opinions today as the double eagle design remains popular with collectors.

The 1873 version of the coin was part of the “Type II” issuance which were minted between 1866 and 1876. During this period of upheaval in the stemming from the Civil War Secretary of the Treasury Salmon P. Chase responded for calls to imbue the coin with a reference to faith. Therefore, he and others decided to inscribe the coin, and nearly all other coins, with “In God We Trust.” To accomplish this change the designer enlarged the circle of stars on the reverse placing the new text within the stars.

By the end of 1872 another change, this one more practical, was requested. Chief Coiner A. Loudon Snowden indicated that the “3” appearing in the date of the coin could be easily mistaken for an “8.” This change is what led to the two versions we have today, an “Open 3,” and a “Closed 3” design.

On the Closed 3 design the knobs of the “3” are identical in size and shape. In contrast, the Open 3 design features a slightly smaller upper knob. The Open 3 version is estimated to be approximately three times more rare than the Closed 3 variety.

This detail is what gives the 1873-S $20 Open 3 its charm. It is a minor, but noticeable change that has come to represent the nuanced appeal that compels coin enthusiasts to seek out the unusual and obscure. In fact, almost none of the pieces struck at the Carson City Mint in Nevada and the San Francisco Mint include the Open 3 design.

Today, the coin enjoys a unique reputation among collectors who hold the piece in esteem for both its rarity and enduring record of US history.