The 1776 Continental dollar coin represents, perhaps more than any other piece of US currency, the state of upheaval within the nation’s colonies in 1776. 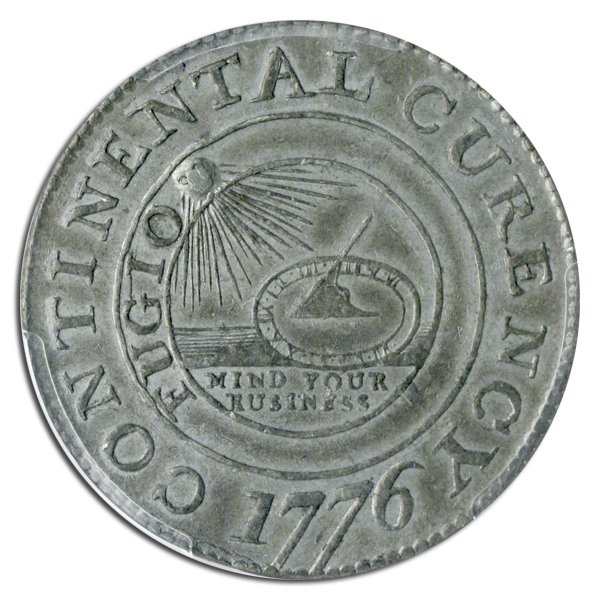 Consider, for example, that there is no known documentation authorizing the issuance or approval of this coin. Moreover, the word currency is misspelled on the obverse of one of the varieties of the coin suggesting that the design and minting was rushed. Under the circumstances, these errors are not surprising. After all, this was the first pattern coin struck for the United States.

After the American Revolutionary War began the US started releasing their own currency. Officials estimate that only 6,000 of these pieces were minted with the production likely occurring in New York. They were made from pewter, and experts estimate that only 100 of these rare coins remain today. The scarcity of the coin is not only due to its age. Many believe that this currency was melted and used as another resource in the war effort.

These characteristics make the 1776 Continental dollar coin especially collectible. Additionally, many collectors appreciate the piece’s close association with Benjamin Franklin who designed both sides. One side shows sun rays shining on a sundial with the Latin “Fugio” which translates to “I flee.” Next to this are the words, “Mind your business” making the complete message “time flies, so mind your business.”

The reverse shows thirteen chain links representing the thirteen original colonies. Their depiction as a chain is meant to encourage solidarity among the nation’s citizens. Imagery like this perfectly captures the mood underpinning the formative years of the country. It was a time when each citizen had to contribute and nothing was accomplished without hard work. In fact, even the coin itself was hand-punched. As a result, no two dies were the same.

The roughness of the colonial coin’s minting can be best explained by the secrecy in which they were produced. In 1776, any efforts by the colonies to mint a new coin would have been seen by the British as an attempt to counterfeit currency. Despite this secrecy, one variety includes the legend “EG FECIT” which is Latin for “EG made this.” Here, EG stands for Elisha Gallaudet who engraved the plates for the coin. There are seven die combinations comprised of four obverse dies, and two reverse dies. The misspelling occurs among these as either the word “curency,” or “currencey.”

Today, the 1776 Continental dollar coin remains one of the most sought after pieces among US collectors. Some varieties are especially rare because they were struck in brass and silver rather than pewter. Numismatists estimate that approximately fifteen brass versions, and four silver versions still exist today.

1 thought on “The Origins of the 1776 Continental Dollar Coin”