The Panama Pacific Commemorative Coin: The Dawn of a New Age - Blanchard and Company
My Account 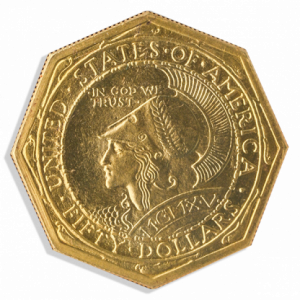 The year 1914 marked the dawn of a new age as the Panama Canal reached completion. Today, the engineering marvel remains a crucial artery of international trade as more than $270 billion worth of cargo passes through the canal every year.

Those behind the project knew the legacy of the canal would be immense. Therefore, they set out to begin planning, and funding the Panama-Pacific International Exposition – a celebration to commemorate the project – years before the canal was complete. These plans were halted when the 1906 San Francisco earthquake destroyed nearly 80% of the city. The death toll surpassed 3,000.

The disaster ultimately changed the underlying meaning of the exposition. While advertised as a celebration of the completion of the canal, the exposition came to symbolize San Francisco’s rise from the devastating events of the earthquake.

Part of the planning included the minting of five Panama-Pacific commemorative coins. The pieces include some of the most original designs created by artists in the US. One coin in particular, the octagonal $50 piece, is the only non-round coin ever minted in the US.

Another one of the five coins is the 1915 gold dollar piece. American sculpture and artist Charles Keck designed the coin. His long and prolific career can be seen across the country. His sculptures are found in places like Oakland City Hall, the Waldorf Astoria Hotel, and the Bronx County Courthouse. His monuments and memorials include, The Lincoln Monument of Wabash in Indiana, and even a George Washington Monument in Buenos Aires, Argentina.

Keck focused his design on those who worked tirelessly to build the canal. The obverse shows the capped head of a construction worker. The reverse shows oversized lettering reading, “Panama–Pacific Exposition”, “San Francisco.” In the center of the text is the denomination of the coin, $1.

Surrounding the words “One Dollar” are a pair of dolphins. This image was intended to symbolize the joining of the Atlantic and Pacific oceans upon completion of the canal.

This coin, and the others, were the result of California Congressman Julius Kahn. He introduced a pair of bills which called upon the politicians of the day to authorize the design of four commemorative coins including a $50 denomination piece (octagonal, and round), a quarter eagle, a gold dollar, and a half dollar.

While each of these pieces featured beautiful designs the coins did not sell well. As a result, many were returned to the mint for melting. Today, the most valuable pieces are the round and octagonal $50 coins. In top condition the $50 round piece could earn up to $240,000 according to experts. In mint condition the $50 octagonal coin could command up to $245,000.

The exposition carried a final, total cost of $50 million, and ran from February 20th 1915 to December 4th of the same year. Total attendance is estimated at about 19 million visitors. The profits were enough to fund the construction of the San Francisco Civic Auditorium.

While scarce, the remaining coins are a symbol of the way the American spirit endures and prevails in the time of crisis.