The Seated Liberty Half Dime: An Enduring Symbol of Freedom - Blanchard and Company
My Account

The U.S. half dime (originally the half disme), was minted in 1792 under the Coinage Act of the same year, and 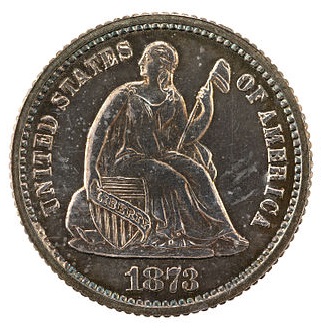 is widely considered to be the first business strike coin issued by the United States Mint. However, there continues to be some debate as to whether the 1792 version was simply a pattern coin.

Ostensibly, this means that the half dime was the first coin minted for the purposes of commerce rather than collecting. (The U.S. Mint, on the other hand, awards the 1793 Chain Cent this distinction). The name “half dime” was given because the coins were thinner than ordinary dimes and had a shorter diameter. The coin was minted for more than 80 years, and the Seated Liberty version marks the final version produced.

Seated Liberty half dimes were minted from 1837 to 1873. The design is considerably different from the original piece. The Seated Liberty depicts Liberty seated on a rock with a shield by her feet. She holds a pole in her right hand with a Phrygian cap on top. This detail is important because the Phrygian cap is a symbol of freedom and liberty. This association with the cap began around the time of the American Revolution and later during the French Revolution. The design of the cap resembles the Roman “pileus” worn by freed slaves in ancient Rome as a symbol of Libertas, the Roman goddess of liberty who wore the same cap. The imagery of the cap looms large in U.S. institutions, including the Army. Since 1778 the “War Office Seal” has depicted the motto “This We’ll Defend” directly above the Phrygian cap on an upturned sword.

The cap, however, was only part of the look of the coin. During the preliminary design stage, starting as early as 1835, artists relied on the silver dollar patterns of 1836. Throughout production, the U.S. minted the coin in Philadelphia, San Francisco and New Orleans. The total minting was more than 84 million coins.

Despite the massive number of half dimes minted, there have been a few rare finds. In the late 1970s, one collector caused ripples in the numismatic community when he claimed to own an 1870-S Half Dime.  Official Mint records indicate that no half dimes were minted in San Francisco in 1870 which led to questions of authenticity. However, the coin was eventually deemed authentic and the coin sold at auction for $425,000. Today the same coin would have an estimated value of $1.5 million to $2 million.

To date, there is only one other known 1870-S half dime. This second piece earned $661,250 at auction in 2004. Other rare examples include uncirculated 1838-O versions minted in New Orleans.

The Seated Liberty Half Dime is a reminder of how much the symbolism of the U.S. and freedom changed between the year of the first half dime minting in 1792 and the final minting in 1873. The first design, known as the “Flowing Hair” half dime, included a simple profile of Liberty with long, wavy hair, in contrast to the vastly different Seated Liberty full of symbolism seen in the shield and Phrygian cap.