The United States expanded its reach in 1803 with the Louisiana Purchase. For $15 million the U.S. acquired 828,000 square miles from France. The additional land doubled the size of the country. Soon after, President Thomas Jefferson took the initiative to find out what awaited in that great wilderness. There were stories of mammoths, and towering salt mountains.

Jefferson tapped his private secretary Meriwether Lewis to mount an expedition into the region. Lewis solicited help from William Clark, a former Army lieutenant. Their journey from present day Pittsburgh to the Pacific Coast ended in 1806. Together the men were successful in mapping the topography of the terrain and collecting plant and mineral samples. They also discovered American Indian tribes and learned about their customs and language. 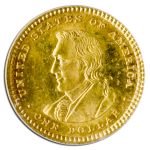 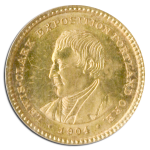 Nearly 100 years later citizens of Oregon made a proposal to honor the explorers. Their plans called for a fair to be held in the city of Portland which represented a portion of Lewis and Clark’s route. By 1904 the organizers were finally successful in securing Federal funding in the form of an appropriations bill which allocated $500,000 to the project. The bill also authorized minting a gold dollar to commemorate the fair. Charles E. Barber, the Mint Chief Engraver, was responsible for designing the coin.

It is believed that the inspiration for the profiles of both Lewis and Clark came from portraits of both men painted by Charles Willson Peale. Clark is on one side and Lewis is on the other. With each piece consisting of 90% gold, and 10% copper. The Philadelphia Mint struck approximately 60,000 pieces from 1904 to 1905, however, just over 40,000 were melted.

The fair began in the summer of 1905 drawing a total of two and a half million people. The coin was designed not only to commemorate the intrepid journey of Lewis and Clark, but also to finance the completion of a Sacagawea statue in Portland’s Washington Park. Unfortunately, the coins were unpopular with collectors at the time of their issuance. Over time, however, this lack of interest has made the Lewis and Clark Exposition gold dollar more valuable. For example, the 1904 coin can command a price anywhere from $900 to $10,000 depending on its condition according to A Guide Book of United States Coins. In fact, a near perfect 1904 coin claimed $57,500 in a 2006 auction. The 1905 coin is worth an estimated $1,200 to $15,000.

Many believe each of the two coins (1904, and 1905) only sold approximately 10,000 pieces each. The coins did, fortunately, sell well enough to successfully finance the completion of the Sacagawea statue. The story of the Lewis and Clark Exposition gold dollar is a reminder that commemorative coins often have a second life. In fact, those that are initially ignored later become rare, sought after pieces because of their scarcity. As with many coins that were unpopular, the Lewis and Clark gold dollar pieces were often incorporated into jewelry like broaches and stickpins. These uses for the coin only further diminished their availability in the secondary market.