The Star of Any Collection - Blanchard and Company
My Account

In the 1870’s, several nations began advocating for the creation of a universal coin that could be used in international trade. The idea gained traction in 1879. 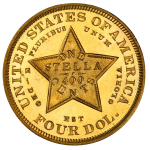 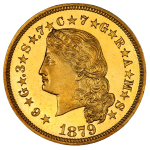 That year, John A. Kasson, the U.S. envoy to Austria-Hungary proposed a U.S. $4 gold coin, which would state its metallic content in the metric system to make it simpler for Europeans to use. The proposed $4 coin would roughly equate to the value of the Spanish 20-peseta, the Italian 20-lire and the British sovereign.

This new coin could facilitate international trade and travel for U.S. citizens, its proponents argued.

Today, that $4 gold coin is reverently known as the Stella and the stories around this coin abound. How did it get its name? The Latin word for star is Stella and the coin features a five-pointed star on its reverse.

This ultra-rarity is beyond the reach of most collectors. Demand for these iconic coins far outstrips supply. On the rare occasions they surface for sale it’s typically from a time-honored, monumental collection of historic U.S. coins. Yet, these pattern coins never were created for circulation. The story continues…

Kassen’s idea intrigued members of Congress and they authorized the U.S. Mint to produce a small run of the $4 gold coins so that Congressman could review them and consider the proposal.

Two obverse designs were produced for the $4 gold piece. Chief Engraver Charles Barber created a design that featured a portrait of Liberty facing left with long, flowing hair on the obverse, known today as the Flowing Hair type. George T. Morgan, the creator of the famous Morgan silver dollars, developed the Coiled Hair type. The reverse of the $4 Stella reveals the motto DEO EST GLORIA, which translates into “God is Glorious.”

While the quest for an international coin failed and none of these pattern coins ever became a regular issue, collectors then and for generations have coveted these illustrious and historic coins.

Even then, demand was high for these awe-inspiring coins. Yet, there were also scandals. After the limited run was produced, rumors surrounded the highly sought after Stellas. While it was said that no coin collector could obtain a Stella from the U.S. Mint, the Congressmen who had received the special order apparently used them as gifts and perhaps even payment. It was said that these great works of numismatic art were seen in special necklaces adorning the bosoms of Washington’s top madams, whose brothels were said to be patronized by those same Congressmen.

These coins were produced just over 100 years after America gained its independence to England. Our nation’s economy was growing rapidly and part of America’s historic Gilded Age. Wealthy industrialists and businessmen like John D. Rockefeller, Andrew Carnegie, J.P. Morgan and Cornelius Vanderbilt built storied empires and also contributed greatly to society through their philanthropy. The $4 Stella is a historic gem from this exciting time in American history.