The State of the Economy and Gold: Tipping Toward Recession - Blanchard and Company
My Account

You may not have noticed, but gold has been up 10% since early November. Indeed, gold jumped again this week scaling the $1,800 mark to hit a new three-and-a-half-month high. Comments from Federal Reserve Chairman Jerome Powell suggesting the central bank will pull back the pace of its interest rate hikes boosted gold and depressed the dollar. 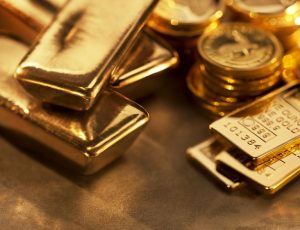 Let’s take a look at the state of the U.S. economy and what it means for gold.

Recession Looming. As rising interest rates impact the economy and higher prices derail consumer spending, a recession is a forecast for early 2023. Here’s what Beth Ann Bovino, Chief Economist, U.S. & Canada S&P Global Ratings, says: “Economic momentum has slowed with a recession next year increasingly likely. As extremely high prices damage purchasing power and aggressive Federal Reserve policy increase borrowing costs, we continue to expect a shallow recession for the U.S. economy in the first half of 2023. Our U.S. GDP growth forecast is 1.8% for 2022 and -0.1% for 2023.”

What this means for gold: The Fed could ease monetary policy in 2023 to support an economy in recession, which will further weaken the U.S. dollar and in turn boost gold. Inflation has eased slightly, but still remains high opening the door to stagflation (low or no economic growth and high inflation) and that is positive for gold. In fact, gold is the best stagflation performer since 1973 with a 12.8% annualized return, according to a Gold Hub.

Midterm election: Americans now face a divided government, which is expected to lead to a gridlocked Congress for the next two years. The Republicans control and House of Representatives and the Democrats control the Senate, both with slim majorities. Don’t expect any significant changes in economic policies. Split government rule increases the risk of a government shutdown and a bruising fight over the debt ceiling in 2023.

What it means for gold: This is bullish for gold. Expect safe-haven demand to boost investor appetite for gold as headlines begin to focus on the debt ceiling borrowing limit. The debt-ceiling standoff in 2011 that triggered a run to the then-all-time high in gold prices over $1,900 an ounce and an entrenched political situation would again be positive for gold next year.

The Fed and monetary policy: The Fed meets next on Dec. 13-14 and is expected to hike interest rates again – but at a smaller amount. Currently, Wall Street expects a .50 basis point rate hike, lower than the recent .75 bp hikes.

What it means for gold: This is positive for gold. “A pivot away from the aggressive rate hikes through 2023 should bring new buyers back into the market,” according to a BofA Global Research report. Looking into 2023, BofA Global Research forecasts gold to climb to $2,000 an ounce.

Inflation: The consumer price index (CPI) revealed that inflation eased slightly in October to an annual rate of 7.7%. That is down from September’s 8.2% reading but still remains extraordinarily high. Looking into 2023, inflation is expected to remain high amid continued supply-chain disruptions. Core prices for consumers, which excludes food and energy, are forecast to remain well above the Federal Reserve’s 2.0% target in 2023.

What it means for gold: This is positive for gold. A stronger dollar held back to gold in 2022 as the Fed’s aggressive interest rate hikes this year boosted the currency. However, expect the Fed to pivot on its interest rate campaign as U.S. economic growth weakens, which will open the door for gold to move sharply higher in the weeks and months ahead.