It was October of 1781. US forces had recently defeated the British in Yorktown. The win was a turning point in the Revolutionary War. Though it would be nearly two more years until the US claimed victory, many were beginning to see how the war would end bringing a close to more than 8 years of bloody battle. 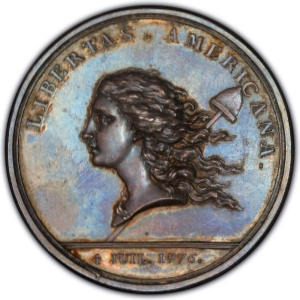 Ben Franklin was in Paris when he learned the news of the US victory in Yorktown. Thrilled by the message, Franklin drafted a response stating, “this puts me in mind of a medal I have had in mind to strike since the last great event…” That other great event was the crucial US victory in Saratoga in October 1777. It was a violent battle in which 440 British troops died and nearly 100 American troops lost their lives. In the end, more than 6,000 British troops were captured during the fighting. Benjamin Franklin’s Libertas Americana coin would be an effort to permanently commemorate these two pivotal moments in history.

The Libertas coin, however, would serve as more than a reminder of the Americans’ bravery in the Revolutionary War.  It would also pay respect to the French. Franklin wanted to draw attention to French support and the resources they offered which were indispensable in the American’s effort to win the war. Their help likely shortened the length of the Revolutionary War. As the American envoy to the court of Louis XVI, Ben Franklin was keenly aware of the power of such a steadfast ally.

Ben Franklin turned to renowned engraver Augustin Dupré to design the piece. His association with the project was fitting not only because of his talents as an artist but because he started his career as an engraver in France at the royal factory for weapons and therefore had experience creating images commemorating war and victory on the battlefield.

Dupré designed one side to show the profile of the head of Liberty with the words Libertas Americana circling around the edge. Below the profile is the date, July 4, 1776 commemorating the Declaration of Independence. The reverse shows France as a soldier armed with a spear and holding a shield while defending America, depicted as an infant, from the British, depicted as a lion. The symbolism in the Libertas Americana coin is powerful as Dupré goes to great lengths to evoke the burgeoning nature of America’s independence amid threats from the British. In an arc around this image is Latin, which translated reads, “The brave infant is aided by the Gods.”

With Benjamin Franklin’s encouragement, minting officials completed the coin dies for striking by March of 1783.  He decided to issue the Libertas coin in three varieties, gold, silver, and copper. The largest portion of the coins struck was copper totaling approximately 200 pieces. The only two gold pieces struck were reserved for Louis XVI and Queen Marie Antoinette. The whereabouts of these two incredibly rare pieces is unknown, though many believe they were melted during the upheaval of the French Revolution. The US struck 50 silver pieces and distributed them to high-ranking government and military officials and European heads of state. These low counts make the coin exceedingly rare.

By the late 1950s renewed interest in the coins prompted the French mint to locate the long unused Libertas Americana dies. French officials found them, however, they were heavily corroded. It was not until 1975 when a private numismatic brokered a deal to have the Paris Mint issue restrikes in a larger size.

Today, the Libertas Americana coins are not only a reminder of the victories of the Revolutionary War, or France’s assistance, but of the influence of Dupré’s work. Since issuing the coin the head of liberty, as designed by Dupré, can be seen on later works like the 1792 pattern dime, the 1793 half cent and the 1793 Liberty Cap, and others.

Perhaps more than any other coin the Libertas Americana manages to touch on so many facets of the American identity.