If you look at a US coin you expect to find a phrase like “E Pluribus Unum.” However, if you’re lucky you might find a coin in your collection with a more ordinary phrase like “I take the responsibility.” Who would put a depressing message like this on a coin? 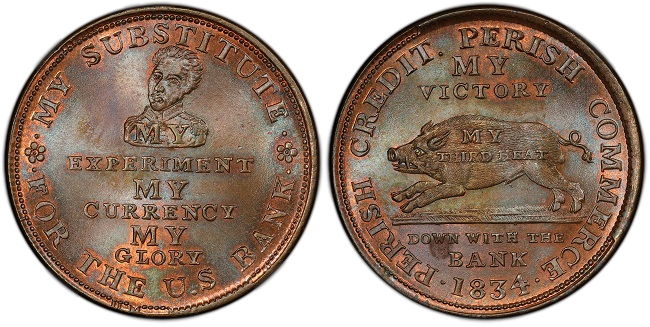 The answer has something to do with former President Andrew Jackson, The Panic of 1837, and copper shortages.

These unusual coins are called Hard Times Tokens. They were privately minted pieces. Therefore, they carried messages reflecting public sentiment, not magnanimous government phrases. These coins with their odd phrases and comedic portraits of then President Jackson were the original meme. How did they come to be?

In 1832 President Jackson vetoed a bill that would have prolonged the existence of the Second Bank of the United States. The move was bold but much of the public supported it. Many believed the bank acted unfairly by favoring northern interests over those of citizens living in the south or out west. The move, however, created an interruption in the money supply. State banks attempted to resolve this problem by increasing their bank note issuance. As a result, inflation took hold of the nation.

Jackson took action. He issued a “Specie Circular.” This was an executive order that required all payments for government land to be in gold or silver. The idea behind this move was that demanding gold and silver would solve the problem of people purchasing land with state issued paper currency which lacked “hard money” backing. This move only devalued paper money more, after all, it was no longer good for land purchases. The Specie Circular and the Deposit and Distribution Act of 1836 which moved much of the gold and silver away from commercial centers precipitated the Panic of 1837.

As a result, many small banks failed. Soon gold and silver disappeared from circulation. People still had copper cents but supplies were thinning. Private minters responded to this development by creating Hard Time Tokens. They are about the size of normal cent. Many have images depicting the political satire of the era. One version shows a turtle carrying a large treasure chest on its shell. The phrasing encircling this picture reads, “Executive Experiment.” Another, an anti-slavery version, shows a slave in shackles and reads, “Am I Not A Man & A Brother.”

Hard Times Tokens have a special place in history. They represent not only the resourcefulness of the American people during trying economic times, they also reflect the pervasive sense of injustice stemming from slavery and misguided government policies.

The tokens fall into one of three categories. The first are political satire pieces illustrating the public’s frustration with the president and the Federal Government. The second are, advertisement pieces which serve to spread the word on merchants, products, and services. The third group are those which were designed to simply resemble an ordinary US cent. Minters issued the pieces between 1832 and 1844. This long duration means that many still survive today. Collectors can own this echo from the past for an affordable price.