In the wild days of the California gold rush (1848-1855) the supply of gold surged in the US. This influx reinvigorated Congress’s interest in producing a gold coin dollar. Originally, the idea to issue a one-dollar gold coin came from Alexander Hamilton, the Secretary of the Treasury. 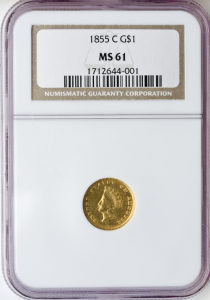 For a long time, government officials, and the US public, advocated for such a coin. Their argument was that issuing a one-dollar gold coin would be convenient in lieu of higher denomination pieces already in circulation. The government made formal moves to make this happen with legislation calling for the minting process to begin. However, the provisions for the coin were removed from the Mint Act of 1837 leaving the initiative languishing. The $10 eagle gold coin was already in circulation and cited by some as a sufficient, existing alternative. However, the denomination didn’t suit everyone’s needs.

Despite this, concerns persisted. Some officials worried that a one-dollar gold coin would incite counterfeiting. Others warned that such a coin might cause confusion in the event that people mistook it for a similar sized half dime.

Eventually, the few dissenting voices faded, and the bill became law in March of 1849. Soon after, Chief Engraver James B. Longacre began his design. Originally the coin featured the head of Liberty surrounded by lettering reading “United States of America.” The same lettering appeared on the obverse with a “1” in the center surrounded by a wreath of olive branches. The composition was 90% gold, and 10% copper.

The original design became known as the “Type 1.” Later, the Type 2 was minted from 1854 to 1856. The reason for the redesign was pragmatic; the high relief design created problems at some of the mints. Longacre altered the head of Liberty and designed her as a Native American Princess wearing a headdress. Longacre also pushed the lettering on the obverse closer to the rim. Together these changes made the imagery sharper and improved the efficiency of the minting process solving the problems of the Type 2. This version of the coin was minted from 1859 to 1889.

However, as the Civil War drew near the volume of the coins minted began to fall. Originally the US minted approximately two million pieces per year. That number fell to about 50,000 per year by 1860. By 1861, when the Civil War began, the US only minted an estimated 1,000 gold dollar coins at Georgia’s Dahlonega mint. These pieces have a “D” marking to signify their origin.

These pieces are especially rare for several reasons. First, the dies used came from Philadelphia. Therefore, they had already experienced significant wear and were only used for a limited period before they cracked and were discarded. Second, those dies arrived in Georgia just days before the state decided to succeed from the Union. As a result, the state’s thinning resources meant that mining operations were likely limited. Third, by the second half of 1861 all dies and coins held at the mint in Dahlonega became property of the treasury of the Confederate States of America. Eventually, many of the 1861-D coins were melted.

Today, the pieces are coveted by collectors seeking to own a coin stamped during one of the most pivotal times in our history. In time the coin was abolished but its value endures.