Errors are something to be avoided unless of course, you’re a coin collector. Error coins represent rare instances of oversight in the minting process. Often, such coins are rare because officials catch the mistake before the currency finds its way into circulation. However, the 1955 Lincoln double die error is an exception. It’s also one of the most sought-after error coins from The United States Mint. 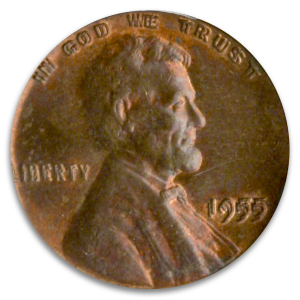 The error comes from the Philadelphia mint. It started with an improperly formed die which is the stamp the creates the impression on the coins. Forming the die requires multiple impressions. During this process, however, workers didn’t align the die correctly. The result: the words “in God we trust,” “liberty,” and the year “1955” all appear as double text on the error coins. The profile of Lincoln, however, is correct.

Typically, an error this glaring would never make it off the production line. However, during the minting process, it’s believed that normal quality control procedures lapsed during an overnight production shift. Additionally, the coin went into production during a penny shortage. This shortfall prompted the Philadelphia mint to ramp up production. This, in turn, led to 12-hour days characterized by rapid-fire minting. The original cause of the shortage: a one-cent tax added to cigarette sales in 1955.

Interestingly, a pack of cigarettes at the time cost 23 cents. With a one-cent tax, the price came to 24 cents. However, vending machines were only equipped to accept quarters. Therefore, customers were expected to pay 25 cents; then inside the cigarette packs, they would find one penny as change for their purchase. Many of the 1955 Lincoln double die cents ended up in these cigarette packs.

While there is no official count, estimates indicate that between 20,000 and 24,000 double die pennies found their way into a batch of nearly 10 million cents, the rest of which were correct.

Not long after the mistake, the error coins appeared in circulation. Given their point of origin in Philadelphia, many of them were found on the east coast in areas like New York, Boston, and Massachusetts. As word spread, citizens became eager to find and keep these coins knowing that their rarity would add to their value over the long-term. Today, many believe that no more than 15,000 have survived.

Some enthusiasts still pour through cheap bags of wheat pennies in hopes of finding one. Some collectors, initially excited, are disappointed when they realize they’ve come across what’s called the “poor man’s” double die. This is not the same as the 1955 Lincoln double die. A “poor man’s” double die is the result of a much less visible double impression that occurs when a worn die creates a distorted image. In 1955 some people paid 25 cents for the real thing. Soon the price went up to $10. Today, of course, they’re worth far more. The next time you see a penny, pick it up.