This Coin Features a Mistake - Blanchard and Company
My Account

Look at the coin below. Do you see the mistake? This 1797 $10 Draped Bust Large Eagle was a bit of a controversy at the time. 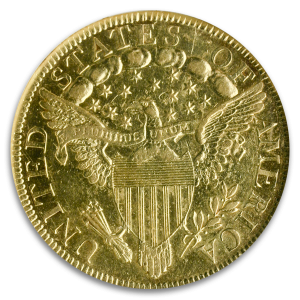 If you look at a dollar bill, you’ll notice that the heraldry there has been fixed, with the eagle having olive branches in his right claw and arrows in his left.

But was it really a mistake after all? Let us consider the XYZ Affair (yes, that is its real name), a little-known souring of American-French relations.

In 1793, France went to war with the United Kingdom while America stayed neutral. We signed the Jay Treaty with the UK, which resolved outstanding issues from the American Revolution. France was none too happy about this, believing it violated treaties between the U.S. and France, so it seized a substantial number of American merchant ships. President John Adams sent a diplomatic delegation to France to parley, but the French foreign minister refused to see them, insisting they first pay him a large bribe, among other conditions.

Outrage spread in the U.S. once this became known, and Adams released a report of the affair to Congress, replacing the names of the French agents involved with the letters, X, Y, and Z. Congress enacted various defense measures, including creating the Department of the Navy, and authorized American ships to attack French ships, thus launching an undeclared war called the Quasi-War (again, its real name).

Hostilities were settled in 1800, but the legacy remains: some believe that the “mistake” on the $10 Draped Bust Large Eagle was no mistake at all, but a sign to France and others: don’t mess with us.

That’s not the only reason this is a special coin: the 1797 mintage is quite low — only 10,940 coins. Additionally, an uncirculated specimen resides in the National Numismatic Collection at the Smithsonian. And finally, it’s the largest format gold coin of the era, measuring 33 mm (1.3 inches) across. Because of its high intrinsic value (that’s a lot of gold), it saw little everyday use.

Are you looking to find the perfect rare coin? Take a look at our products and give us a call. We’re happy to help.