Rare coins always have a story to tell. 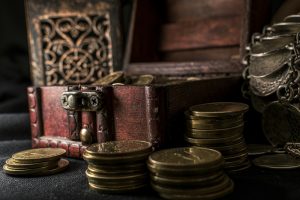 In 1915 Congress decided to commemorate the Panama-Pacific International Exposition held in San Francisco. The legislation allowed for five unique coins to be minted, two of them were $50 pieces. One, particularly unusual in design, was octagonal. Quite a bit of effort went into minting the coins; professionals hauled a 14-ton press all the way from the Philadelphia mint to San Francisco. Interestingly, all the pieces sold poorly. As a result, many were returned for melting making them particularly rare today. Based on the quality, such a coin in today’s market could fetch anywhere from $33,000 to as much as $375,000. In fact, in one episode of Pawn Stars, the store owner, Rick, traveled to a major coin auction in Atlanta to find one of these rare pieces of history for a customer. Eventually, he tracked one down paying $67,500 for the coin. Shortly after, the customer bought it, as promised, for $70,000.

One man in England re-discovered a gold coin he received as a child. Now 35, the man found the piece his father gave him, in a toy treasure chest. Apparently, no one in the family believed it carried much value. They were wrong. The coin is one of the rarest in all of Britain. It was a Queen Anne ‘Vigo’ gold piece valued at ￡250,000. It is one of only 20 minted. Of those twenty, five still remain unaccounted for. The coins were minted in the early 1700s. The gold used was part of the treasure the British took from a fleet that attempted, and failed, to take Cadiz, a Spanish city. As recently as 2013 another one of these coins claimed ￡300,000. The man believes the origin of the coin within his family dates back to his grandfather who traveled the world during his working years and made it a hobby to collect rare pieces.

Sometime a gold coin find is a historic event for more than one reason. This is the case with one man’s find in Norfolk, UK. A gold pendant and other coins, now belongs to a 23-year-old amateur metal detectorist. Moreover, some have claimed that the find is rewriting Anglo Saxon history as we know it. Experts suggest the find is worth ￡145,000. The pendant rested around a female skeleton’s neck buried in the soil. Originally, the piece was imported from Sri Lanka. The site also contained coins “bearing the marks of a continental king [which] is prompting a fundamental reassessment of the seats of power in Anglo Saxon England.” The value of the treasure suggests that the woman was of a particularly high status, perhaps even a member of the royal elite. One piece among the horde includes a golden cross which is now one of the earliest symbols of Christianity ever discovered. In an interview, the detectorist explained that he would likely use the proceeds for a payment on a home.