The early 1870s were an important time for the United States Mint. In one key event, 1873 passage of the Coinage Act marked the last year that the silver dollar coin would be struck. 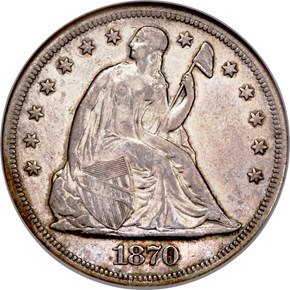 Also known as the 1870 Seated Liberty Silver Dollar, this silver dollar has a face value of $1.00. It was designed in 1840 by Christian Gobrecht, the Chief Engraver of the U.S. Mint at that time.

The coins obverse and reverse sides were originally based off of one of Gobrechts earlier silver dollar designs, with a left-facing seated lady liberty on the front. The back of his early design depicted a soaring eagle.

However, prior to full-scale production of the silver dollar coin in 1840, the Director of the U.S. Mint changed the designs slightly. The seated lady liberty design was modified to depict a woman with a larger head and fuller clothing. Thirteen stars were also placed around her head and the overall relief was lowered.

On the reverse, the soaring eagle was replaced by a left-facing eagle, inclusive of a shield on its breast. The words United States of America and One Dollar were kept as part of the original design, but a banner with the words In God We Trust was added.

The 1870 silver dollar coin reflects all of these design changes and modifications.

However, the value of the coin doesn’t stop there. A rough estimate of the coins numismatic value is said to be around $177,286. Further, an 1870 silver dollar that is in a certified mint state can be expected to fetch around $1,959,95 at auction. This makes it one of the most valuable silver dollar coins in United States history.

With extreme rarity comes extreme value. While silver dollar coins were minted in multiple locations between 1840 and 1873, very few coins from 1870 are available today. This is attributed, in part, to the fact that many of the coins were melted down to be repurposed coins of a smaller denomination. After the passage of the Coinage Act, these coins were not again seen until 1914, at the American Numismatic Society Exhibition.

With roughly ten still in existence, it should come as no surprise that the numismatic collector’s value of the 1870 silver dollar coin is incredibly high. In 2003, a verified coin in uncirculated condition sold for over $1 million. Even coins in less than stellar condition will likely exceed the six figure mark and, as time passes, can be expected to move beyond the 2003 auction price.