Don’t worry about a financial doomsday, if it comes you’ll be sipping iced tea on the beach. Science proves it. 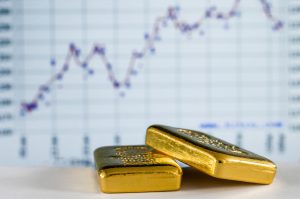 A chain of record-breaking gains in the equity market has made investors nervous. They’re asking “how much longer will this last?” In 2017 the Dow Jones Industrial Average saw 70 record closings. Meanwhile, the S&P 500 hit 69 record closes in the year.

In January of this year, the Dow surged 322 points to close above 26,000 for the first time. Investors are fearful that Newton was right. What goes up must come down. Way down. While no one can accurately predict the next crash or correction, most agree that stocks will come back to Earth. After all, we’re 10 years into the bull market.

So how does an investor reliably shield themselves? Researchers have learned that “empirical results show that gold is a safe haven for stocks.”

Their research shows that gold functions as a safe haven for approximately 15 days. Any seasoned investor knows how much can happen in 15 days. In fact, it took only one day for the Dow to fall more than 22% in 1987. However, for gold to behave as a true haven during periods of turmoil in the stock market, investors must remember a few essential rules.

They found that investors who “purchase gold only after an extreme negative shock occurred” didn’t receive any of the protection they needed. Buying late in the game only decreases the portfolio’s value.

Part of the researchers’ inspiration stems from prospect theory. The idea, created and developed by Nobel Prize winner Daniel Kahneman, argues that people value losses and gains in different ways. For this reason, the theory is sometimes called “loss-aversion.” The theory suggests that people will make different decisions about where to invest based on how that investment’s performance is presented.

If the investment is presented in a way that highlights periods of decline, then most avoid it. If the same performance is described with language highlighting the periods of positive performance, most investors will jump in.

Humans are tuned to how others “spin” it.

During a boom period for equities, investors see plenty of positive spin. They see record-breaking years like 2017. They perceive the probability of a gain as something greater than what is really presented.

The study illustrates not only gold’s power but also the psychological biases governing our decisions. The more investors become aware of these biases, the more they can do to counteract them. These findings are significant for long-term investors because after a major negative stock return “the figures show a relatively constant gold price.”

You can’t control the market, but you can control your exposure to downside risk with safe-haven assets like gold held over the long-term. “The key characteristic of a safe haven asset is the fact that it is effective in extreme market conditions in contrast to a hedge that is only effective on average but not necessarily in times of market turmoil,” write the researchers.

Get that iced tea ready!