It’s commonly know that gold is a great hedge against inflation and a proven portfolio diversifier. 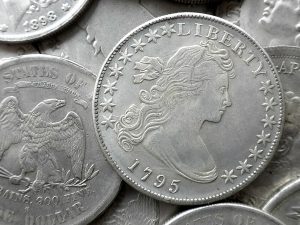 What isn’t commonly known is that investments in U.S. rare coins do an even better job at growing your long-term investment returns.

In fact, the investment return on U.S. rare coins over the last 40 years is higher than other assets and TWICE THAT OF GOLD, according to an independent study by Raymond E. Lombra, Ph.D., entitled The Investment Performance of U.S. Rare Coins.

Heading into the final quarter of 2019, we identify rising macro risks for investors. Here are just five of the risks that dominate the horizon as we cast our eyes into 2020.

We recommend investors take proactive steps to protect and grow wealth in the face of rising market uncertainty. There are simple steps you can easily take to play defense right now.

Past performance can give us clues about the future.

The appeal of rare coins is their impressive historical price appreciation, which has outpaced gold’s returns. Penn State University Professor Raymond Lombra conducted an independent study on the investment performance of U.S. rare coins from January 1979 to December 2016. He found that coins rated MS-65 nearly doubled the performance return of gold over that time.

That data shows if you converted a portion of your gold bullion holdings into rare coins you could double your investment returns on tangible assets over the next two to three years.

Getting Started Is Easy

Take these steps now to reduce portfolio volatility and protect and grow your wealth during the next economic recession and bear market in stocks.

If the U.S. moves back to a zero-interest rate environment like it did during the 2009-2009 global financial crisis or even goes negative, or the stock market crashes, you can expect new all-time highs in gold above the $1,900 an ounce level. Many on Wall Street are already forecasting gold gains to the $2,000 an ounce level.

Just imagine what that will do to the U.S. rare coin market!

If history shows that U.S. rare coins gain twice as much as gold, investments in numismatics could easily double in 2020 and 2021 from current levels.

Incorporating defensive strategies like converting gold bullion into numismatics investments could be a way to more than double your investment return in tangible assets over the next two to three years. A Blanchard portfolio manager can help you develop a personalized investment plan when you call today at 1-800-880-4653.