The 1835 Capped Bust Dime - Blanchard and Company
My Account 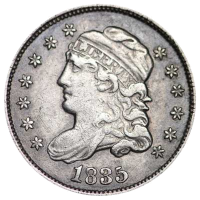 It would surprise many to learn that a coin designer at the US Mint in Philadelphia was, in fact, born in Germany. This unlikely origin for someone who has left such an indelible mark on US coins is only one of many unexpected sides to John Reich who, in 1800, moved to the United States after the Revolutionary War came to an end.

His early work was so striking that Thomas Jefferson recommended that Reich receive the position of engraver at the US Mint. However, despite the prestige of a recommendation from Thomas Jefferson, Reich’s first job at the mint was a small one. Disillusioned, he considered returning to Europe before finally receiving a promotion where he ascended to the role of assistant engraver in 1807.

At the time, Chief Engraver Robert Scot was 62 years old. His eyesight was beginning to fail him and he was in need of new talent. As a result, mint Director Robert M. Patterson assigned Reich the task of redesigning many existing coins. One such coin was the Capped Bust coin. The pieces, also known as the Liberty Cap coins, included the 1835 dime struck in 89.2% silver and 10.8% copper.

In time, engraver William Kneass, serving as the second Chief Engraver of the United States Mint from 1824 to 1840, modified the piece. The obverse depicted a left-profile portrait of Liberty in a cap surrounded by thirteen stars. The reverse shows the heraldic eagle design with a shield in the foreground with an olive branch in one of the eagle’s talons and arrows in the other.

The popularity of the 1835  dime is evidenced by the fact that it has the highest mintage of any dime before 1838. The design of the piece can also be found in an earlier gold version of the coin created in 1795 by Robert Scot. Many believed that Scot looked to Martha Washington as inspiration for the appearance of Liberty. The turban shown on Liberty’s head was considered an exotic choice at the time and became one of the most memorable features of the coin.

Other aspects of the design, however, were unpopular. The reverse image on the original design showed an eagle perched on a branch with a victory wreath in its mouth with the engraving, “The United States of America.” This imagery only lasted a few short years from 1795 to 1797. Critics believed the eagle lacked the boldness it deserved. They wanted the eagle to be more emblematic of the power and stature they believed the US represented.

Redesigns featured eagle imagery based on the United States Seal. In response to the previous criticisms, Scot placed the arrows in the eagle’s right talon because this was considered the bird’s dominant talon, thereby illustrating strength on the part of the US.

In many ways the 1835 Capped Bust Dime represents several defining characteristics of the US, from an immigrant who became an influential artist in the depiction of the US character..