Economic Q&A with Peter Boockvar - Blanchard and Company
My Account

In speaking with many of my clients over the last few months, I’ve been asked several questions about the state of the economy, the current and future prices of gold, and how you can best protect your wealth. 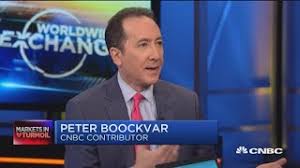 As we all can see, there is a great deal of volatility and instability in the current market environment. Inflation is at a 40-year high, significantly impacting everything from mortgage rates to grocery prices. How this affects us all, both now and in the future, is a valid concern.

To best answer your questions, I’ve once again turned to good friend of mine, Peter Boockvar. Peter and I have known each other for many years and I value and trust his advice.

Peter is the Chief Investment Officer at Bleakley Financial Group and is also editor of The Boock Report. Peter may be familiar to you as well, as he is a regular contributor on CNBC.

I’ve posed your questions to Peter, asking for his insight and his answers are below.

David: What are the key factors driving inflation higher?

Peter: Inflation over the past two years was predominantly on the goods side, notably new and used cars in addition to the rise in energy and food prices but has now been joined by an acceleration of service prices, particularly rents.

David: The Federal Reserve has stated they will aggressively hike interest rates to tamp down inflation. Will rate hikes cool inflation?

Peter: Many goods prices are beginning to cool off but that is three-fold, #1 prices got too expensive, #2 consumers bought a lot of goods over the past two years and now we’re seeing a spending hangover, #3 Fed rate hikes are slowing economic growth as well. Services inflation will though be a mitigating factor as prices here will continue to accelerate.

David: Do you see similarities in the current situation to the 2015 attempt to raise interest rates?

David: What are the negative impacts of “aggressive” Federal Reserve rate hikes?

Peter: As we’ve become a very low interest rate dependent economy and asset prices have been inflated by cheap money, a rise in the cost of capital has the potential of being highly disruptive to this environment.

David: The U.S. dollar has surged to 20-year highs against some currencies. What are the negative impacts of the stronger dollar and how is that impacting gold?

Peter: A very strong dollar should be considered a tightening of financial conditions because it negatively impacts earnings of multinationals, it hurts foreign economies that import many of their raw materials and can be negative for those foreign countries and companies that have dollar denominated debt. The US dollar strength has been an obvious headwind for gold but as gold is just another currency, it could still rally vs the dollar even if the dollar rallies against other things. This though is not currently happening as we see.

David: Why hasn’t gold performed better with inflation at a 40-year high?

Peter: It’s due to faith that the Fed will tamp down on inflation and the coincident rally in the dollar have been the major negatives.

David: What impact could sharply higher interest rates have on our record-high government debt?

Peter: The interest expense of the federal government is going to skyrocket in the coming years.

David: Much is being said of the possibility of a coming recession.  How will that impact gold?

Peter: If a recession leads to a pivot from the Fed in their rate hiking cycle that would be dollar negative and likely bullish for gold.

David: Could the Fed be forced to put the brakes on rate hikes if we fall into a recession?

Peter: Yes, but only if the unemployment rate jumps notably from here to something above 5%.

David: Do you see the potential for a replay of the 1970’s period of stagflation – weak economic growth and high inflation?

Peter: We are in a stagflationary environment now and it’s a global phenomenon.

David: How long do you expect inflation to stay elevated? Are we in a new era of persistent high inflation?

Peter: We’re at or near the peak in inflation as goods prices are up at a slower pace for the 4th month in a row. Services inflation is still rising but the net result will be a peak in the rate of overall change. But a deceleration in inflation will take time and it will be years before we get back to something under 2%.

David: How could mid-term elections impact the economy/markets and gold?

Peter: Not sure if it will but if the Republicans take the House, the regulatory pressure could ease somewhat.

Peter: It’s very positive if one believes that central banks won’t be able to create a soft landing for the economy. In contrast, if one has faith in the Fed and its peers, don’t own gold.