Think back to the earliest days of the United States. Place yourself in the late 1700s. Imagine the excitement felt by the citizens of this young country who had just gone through the battle of their lives to establish their independence as a sovereign nation. This new nation was based on the principles of life, liberty and the pursuit of happiness. Close your eyes and put yourself back in that time. Feel the pride that these new citizens of the United States must have felt in their country. 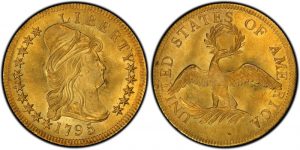 How much has changed since that time? How have we, as a country, preserved and held steadfast to those principles? Wouldn’t we all like to get in touch with that pride and actually hold and preserve that pride? Early gold (coinage minted from 1795 -1834) can do that for you.

In the twelve years I have worked in the rare coins and precious metals industry, nearly every investor or collector that I’ve spoken to has been excited about the opportunity to own something from this time period. Investment-wise, these coins have always provided them with tremendous universal appeal combined with very high rarity. These factors combine to provide investors and collectors with what has proven to be one of the strongest and most secure long-term investments available. In fact, over the past three years, gold investors, like you, have seen some of their early gold coins rise in value over 200%! There is simply no other class of coins that disappear from our available inventory faster than early gold.

The majority of these early gold coins were minted from 1795-1804 during which time the United States mint manufactured $2.50, $5.00 and $10.00 gold coins ($2.50 were first minted in 1796). Most of these coins were transported out of the country and melted down because the gold content could be sold in European commercial centers for more than face value. This fact, and the age of the coins (most are over 200 years old) create a class of investment that gives you tremendous rarity with the universal appeal of early gold and you will hold in your portfolio what has proven to be one the most consistent top performers in the gold coin market.