Attention Coin Collectors: Can You Answer These 4 Questions? - Blanchard and Company
My Account

Investing in rare coins is not only fulfilling financially, it’s fun too. Owning a rare coin is the opportunity to walk back in history. Learn more about the era in which the coin was circulated and the rich heritage of the coin itself. Here are four questions. Let us know if you already knew the answers. 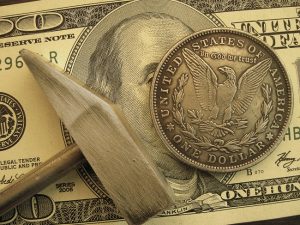 1. Question: What is the most expensive coin sold?

A little history: These are the first dollar coins to be issued by the U.S. government and were were minted for only two years: 1794 and 1795. Only 1,758 of these dollar coins were produced in the first year, and those were intended for use as souvenirs rather than legal tender.

Although the first specimens produced were deemed at the time to be of poor quality, these dollar coins have become among the most highly prized collectibles with numismatists and investors.

2. Question: What is one of the most valuable coins you could find in your pocket change?

This extremely sought after and rare coin is easily identified by extremely strong doubling on the motto IN GOD WE TRUST as well as on the word LIBERTY and the date on the obverse (heads side).

After the collecting community noticed the aberration, early coins were reportedly seized by the Secret Service amid concerns of counterfeiting. However, once the coin was confirmed to be genuine, collectors began searching in earnest for this coin and the hunt continues today.

Last Year: A Michigan coin collector was searching through a 50-coin roll of pennies and stumbled upon an uncirculated 1969 – S Double Die Lincoln penny, a 2017 report noted. The coin was estimated to have value of at least $44,000 and perhaps as high as $100,000.

3. Question: What is the average lifespan of a dollar bill?

Answer: A $1 bill lasts about 22 months before it is so worn that is must be taken out of circulation and replaced, according to the Federal Reserve. A $5 bill lasts slightly longer at two years and a $10 bill lasts three years. A hundred? That lasts about nine years.

Nonetheless, “paper” money can’t hold a candle to gold and silver coins. Want to compare that to a lifespan of a gold coin? One of the world’s oldest gold coins – an Ionian “Striated” Stater, was sold to a private collector in 2016. The coin is estimated to be 2,650 years old.

4. Question: Why do some coins (like quarters and dimes) have ridges?

Answer: When common circulated coins were made of gold and silver, some enterprising thieves would shave off the edges of these coins and sell them.

The U.S. Mint fought back against this illegal practice by adding ridges or “reeds” on the sides of coins.

The penny and nickel don’t have reeds because they were never made of precious metals.

What’s your favorite fun fact that you’ve learned about coin collecting investing? Please join the conversation and add a comment below!

2 thoughts on “Attention Coin Collectors: Can You Answer These 4 Questions?”