Recent headlines have been a constant reminder of destabilized relations with North Korea. As CNN reports, “The country has fired 21 missiles during 14 tests since February.” This frequency signals a powerful drive by North Korea to gain attention as a nuclear capability on the world stage. “Less than six years into his reign, Kim Jong Un has tested more missiles than his father and grandfather combined,” continued the reporting. 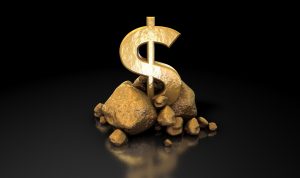 This development has alarmed Americans fearful that North Korea leader Kim Jong Un will soon reach a level of engineering sophistication necessary to incite a war. Meanwhile, the United Nations Security Council adopted a new resolution from the U.S. to impose new sanctions on the country. The move aims to limit oil imports, ban textile exports and stop joint efforts with other nations. Investors are taking notice.

In recent weeks, we’ve seen financial markets move in step with rising and falling fears stoked by Kim Jong Un. At the same time, gold has seen a rise as investors turn the the “safe haven” characteristics of the currency. Simultaneously, cryptocurrencies have risen for similar reasons. These tandem movements have led some to compare the two investments. “Approximately $155 billion in cryptocurrencies are in circulation around the world right now. Bitcoin by itself is at $78 billion, which is close to the $90 billion invested in all gold ETFs,” remarked Forbes. Some investors are asking where their assets are best held, in bitcoin or gold?

Proponents of bitcoin often advocate that the “supply is mathematically metered” and therefore much more likely to grow in value over time whereas “the global gold supply has inflated steadily over the last hundred years,” according to authors at ARK Invest and Coinbase Inc. While these statements are true, they ignore an important counter argument. Bitcoin is still exposed to “counterparty risk.”

We have previously discussed counterparty risk at Blanchard. In short, counterparty risk is the risk inherent in an investment, like equities, that involves another party. If this group doesn’t hold up their end of the deal you, as the investor, can be left holding the bag. A publicly traded company (like Enron) might reveal themselves as fraudsters losing millions of shareholder investments. The technological marvel and novelty of bitcoin often leads investors to forget that with such an investment counterparty risk is very real.

However, if the transactions behind bitcoin are purely democratic, peer-to-peer, and on a shared, open ledger, how does counterparty risk enter the picture? This is where we return to North Korea’s saber rattling.

Bitcoin needs the internet to live, gold doesn’t. In a full military strike, infrastructures like the country’s internet are likely to be a primary target. Gold survives even without the supporting structure of technology.

Bitcoin, like the fiat currencies it eschews, is man-made. Technology is such a ubiquitous presence in our lives we often forget that it’s even present. Bitcoin investors would do well to temper their support for such a new asset that has not yet been tested against the leveling effect of warring nations especially in the nuclear age.