What’s that coin worth? 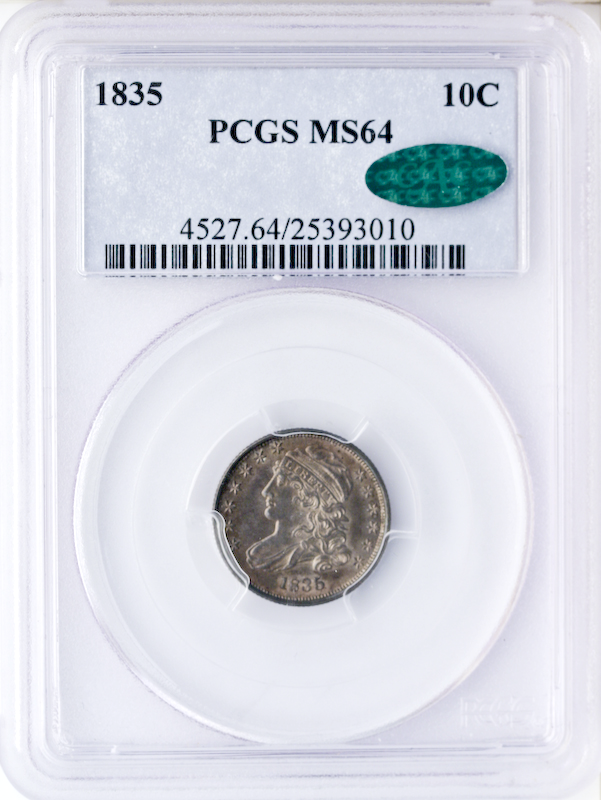 After John Reich designed the Capped Bust dime, citizens and foreigners no longer wondered what that coin in their hand was worth.

The Capped Bust dime was the first dime that stated its face value on the coin.

Minted from 1809 through 1837, Reich is credited with this important innovation of including the value “10C” on the coin.

Reich developed the popular ‘Liberty with a cap’ concept, which was struck on the half dollar, quarter, dime and half dime.

While the mintage totaled 1,190,000 in 1835 out of the Philadelphia mint, uncirculated specimens in higher grades are difficult to find. We have just one mint state, uncirculated 1835 Capped Bust Dime.

1835 was a significant year in United States history. That represents the year that President Andrew Jackson paid off the national debt. Jackson hated debt.

To accomplish this impressive goal Jackson took advantage of the real estate bubble occurring in the Western US and he started selling off federal land in the West. He also blocked spending bills left and right.

The national debt totaled about $58 million when Jackson took office and six years later in 1835 he paid it off.

Will the United States ever be debt free again? Nobody knows.

This dime is not only an exquisite specimen of the popular Caped Bust series in a high grade, it represents the year when our government paid its national debt off. That by itself makes this a special and unique rarity.

The Capped Bust Dime obverse features Liberty wearing a graceful cloth cap inscribed with the words LIBERTY. Her soft and curly hair flows to her shoulders. The coin features seven stars on the left and six on the right with the year at the bottom. The reverse showcases a proud eagle resting on a branch, holding a number of arrows. This silver coin has a reeded edge.

Want to stay updated on the latest market news, Tales from the Vault and our favorite stories from around the world? Sign up for our newsletter here.