If there is one classic Mexican coin that serious U.S. numismatic collectors covet, it’s the Pillar dollar.

The 8 Reale, also known as “piece of eight,” is an iconic silver coin which was struck at the Mexico City Mint between 1732 and 1772. 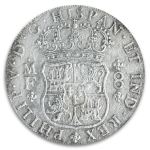 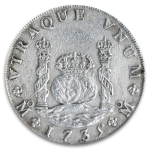 Mexican Pillar dollars were minted across South America under Spanish colonial rule. These coins circulated widely in colonial America and were even legal tender in the U.S. until the Coinage Act of 1857.

We have one of these exquisite rarities that was recovered from a dramatic 1739 shipwreck.

In 1739, a Dutch East India company ship – the Rooswijk – set off for Jakarta to buy spices and porcelain. The cargo included silver bullion and ingots.

A devastating storm overtook the ship. The Rooswijk sank on the infamous Goodwin Sands off the coast of England on December 19, 1739, only one day after it set sail. All 300 people aboard perished.

It has been documented that over 1,000 ships wrecked on the notorious Goodwin Sands sandbanks, often called the “great ship swallower.”

In 2004, Ken Welling, a British carpenter, was diving on the Goodwin Sands. He discovered the shipwreck and her treasure an incredible 265 years after the fateful storm.

Archeological salvage operations recovered beautiful Mexican silver dollars, minted just a few years before the shipwreck. Most of the silver found on the ship was returned to the Netherlands, which increases the rarity of the coin we have on offer today.

Other artifacts recovered from the Rooswijk wreck included glass bottles, a fancy wine glass with an air twist stem, thought to have come from the captain’s cabin, pewter jugs, an onion jar, tiles from the cooking stove still scorched by the last meal, three wooden chests and one human thigh bone.

Silver coins were also discovered on the shipwreck that were not part of the official manifest.

While smuggling silver was prohibited by the Dutch East India Company, the large amount of silver found on board that was not part of the official cargo suggests this was a common practice.

Archaeologists believe this shows that some of the Rooswijk’s passengers were smuggling silver to trade illegally, amid high demand for these silver coins around the world.  In fact, some coins had holes in them, which suggests the crew sewed them into their clothes to smuggle. Sailors were also known to hide silver in their shoes and belts.

The National Geographic Channel created a show about the Rooswijk and the archeologists who salvaged the treasure in an episode called “Sunken Treasures.”

The Pillar Dollar is not only beautiful, but rich with history.

The Spanish Pillar dollar was widely used in commerce in many countries around the globe. In fact, the Pillar dollar is considered to be the world’s first international currency and was widely accepted due to its minting uniformity.

The coin features two globes, representing the Old and New worlds, between pillars, sitting beneath a crown. The Spanish arms is depicted on the coin’s reverse.

Imagine what it would be like to hold in your hands a coin that sat under the sea for 265 years. You can own it for only $589. See the Mexican 8 Reale here.