Prior to the 2008 Global Financial Crisis, the Federal Reserve board relied upon a little known but useful guideline that economists called “The Taylor Rule.” 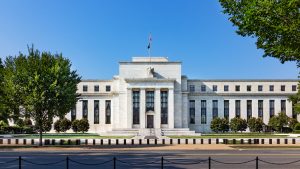 We thought it was time to dust off the Taylor Rule, shine some light on what it says – and also discuss what’s happened since the Fed abandoned its previously useful guideline.

First, what is the Taylor Rule? Stanford University professor John Taylor introduced this formula in 1993 which prescribes a certain level of Federal Reserve interest rate based on the rate of inflation and how strong the economy is growing. This mathematical formula delivers an exact level of where the Fed’s benchmark interest rate should be.

As you may be aware, the Fed’s benchmark interest rate remains extremely low by historical standards. Yes, the Fed did notch up its rate by a quarter point recently – but it still stands at a paltry 0.25-0.50%.

The fact that the Federal Reserve has stood idly by over the past six months while inflation crept higher and higher – to a now 40-year high – probably has former Fed Chairman Paul Volcker turning over in his grave.

Mr. Volcker was widely known for his success as Fed Chairman waging a successful war to end the high levels of inflation seen in the U.S. during the late 1970’s and early 1980’s.

So, where does the Taylor Rule say the Fed’s benchmark interest rate should be now?

The Fed’s interest rate should be over 5.0%, not below 1%! It’s like the Fed has been asleep at the wheel.

Not only that, in the past 14 years since U.S. central bankers threw out their playbook, the size of the U.S. balance sheet has exploded to a record high now standing at $8.9 trillion – with a “t” U.S. dollars. Before the 2008 crisis, the Fed’s balance sheet was around $870 billion. It’s no wonder inflation has skyrocketed. The U.S. government has been printing money like no time before in history and the Fed has been sitting on its hands when it comes to interest rates.

Precious Metals: A Safe Haven in These Unpredictable Times

When you can’t count on the Fed to follow predictable rules, individual investors must take the financial future into their own hands.

Precious metals have climbed in value this year as investors big and small turn to gold and silver to protect and hedge their wealth. The inflation genie has been let out of the bottle. The Fed knew better, but they still failed to act faster. When it comes to your money and your financial future, it’s never been more important to make decisions that will protect your hard earned money. Do you own enough gold?