As the California gold rush introduced more gold into the economy the U.S. Congress resolved to design and issue a gold dollar. The decision, however, was not without detractors. The Mint director at the time, Robert Patterson, was opposed to the idea. When a bill was introduced to support the initiative, some argued that it would lead to problems like counterfeit currency, and confusion with other coins. Others, in favor of the idea, cited benefits. They advocated for the coins by explaining that they would enable currency circulation in small communities where banknotes were not used. The arguments prevailed and in 1849 the bill passed. 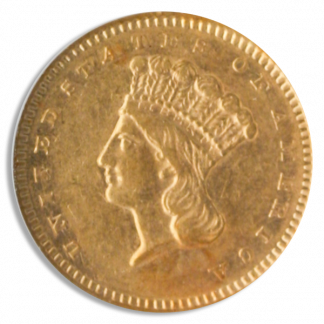 Chief Engraver James B. Longacre began work on the designs. He made the work of preparing the coin his singular mission. As an artist he wanted to own the entire process stating that he would “execute this work single handed.” The original piece was the profile of Liberty with a coronet with the word “Liberty” across the top. The design was simple, but elegant and earned largely positive reviews. The first production began in early May of 1849.

In time, the gold dollar rose in prominence. This outcome, however, was not due to the beauty of the design, but instead for more prosaic reasons relating to the rise of silver prices. As silver became more expensive more U.S. silver coins started to exit the country for melting. An imbalance started to occur as the value of the silver within coins was surpassing the face value of the pieces. Silver coins began to disappear and soon the gold dollar was the sole federal coin in circulation that filled the gap between the cent and the quarter eagle. These circumstances led to an increase in the minting of the gold dollar. Eventually, silver coins returned to circulation in 1853 when Congress allowed silver coins to be minted in smaller weights.

Later, the Type 2 (1854-1856) and the type 3 (1856-1889) $1 gold pieces featured Liberty as a Native American princess with a headdress in feathers. The look of these coins was inspired by the sculpture Venus Accroupie or Crouching Venus on display in Philadelphia.

Mintages eventually decreased as the 1850s passed and 1862 marked the last year in which production exceeded one million pieces. During the following year minting plummeted to less than 7,000 pieces. Over the lifetime of the coin’s minting the vast majority came from the Philadelphia Mint. Smaller portions of the total came from San Francisco, New Orleans, and Charlotte. Certain portions of the total issuance remain exceedingly rare today including the 1861-D coin of which only an estimated 1,000 were minted. Today, it is believed that no more than 60 are accounted for.

Today the coin remains a sought-after piece representing the fervor surrounding the California gold rush and the formative years of the nation’s currency system. The deep cameo finish is a powerful look that brings the beauty of the profile into contrast with the mirrored background.