It was September 1857. A 280-foot, wooden-hulled steamer named the S.S.Central America set sail for New York from San Francisco. 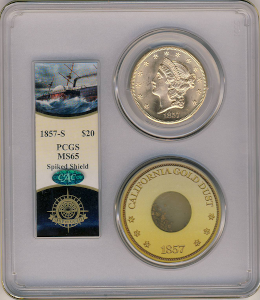 Known as the Ship of Gold this steamer carried 578 souls and over two tons of gold and coins from San Francisco.

Unwittingly, this legendary ship sailed straight into a Category 2 hurricane off the coast of the Carolinas.

She took on water fast and the 105 mph winds shredded her sails. Steam pressure fell and the bilge pumps failed. The crew flew the ship’s flag inverted – a distress signal. They bailed water all night long valiantly fighting back against the monster storm. Two ships came to their rescue and transported 153 of the passengers to safety in lifeboats. Eventually, the captain fired his final rocket – a signal the ship would soon go under. Tragically, 425 passengers died as the ship sunk.

Complete devastation – the human and economic toll was high in this disaster.

In its time, the S.S.Central America shipwreck was as famous as the Titanic in the twentieth century. Historians describe the ship’s demise as the greatest economic catastrophe in U.S. maritime history.

Indeed, the loss of the ship’s gold triggered the infamous Panic of 1857 and the subsequent economic recession that reverberated around the globe.

In 1988, a team using a remotely operated vehicle discovered the ship 160 miles off the coast at a depth of 7,200 feet. Gold estimated to be worth $100 million to $150 million was recovered.

Thirty-nine insurance companies filed lawsuits – attempting to claim rights to the gold. They said because their firms had paid damages in the 19th century for the lost gold – they had the right to it. Eventually, after a lengthy legal battle – the courts awarded the majority of the gold to the discovery team in 1996.

David Hall, founder of PCGS, calls the S.S. Central America “one of the greatest treasures in United States numismatic history.”

Blanchard proudly presents 1857 $1 SS Central America 1.5 Grams Gold Nuggets from one of the most famous shipwrecks in all of history. See these stunning pieces of history here.

Owning a shipwreck coin is special in many ways. They are rare. Thousands of ships have sunk throughout history, only a very few have their treasure recovered. They are also spectacular historical artifacts – a tangible piece of America’s earlier era. Last but not least, shipwreck coins typically retain fine details, luster and strikes – despite spending over a century on the ocean’s floor.

For a limited time, we’re offering 10% off historic gold nuggets recovered from the S.S. Central America. Just add the coupon code GOLDNUGGETS when you order online.