Six U.S. Mint Error Coins You Should Know About - Blanchard and Company
My Account

In 2021, the U.S. Mint produced nearly 14.5 billion coins. Despite first-class technology and extensive quality control efforts – some mistakes happen – and these are known as error coins or misstrikes.

Mint error coins are one of the most intriguing categories in numismatics. Collectors value these coins according to their scarcity, and price is determined by supply and demand. The fewer misstrike or error coins that were produced, the more valuable those coins are today. In fact, misstrikes and error coins typically hold a higher value than a coin in its intended condition. Some of the rarest error coins are worth $150,000 or more.

Before we highlight six valuable mint error coins, let’s explain how a few common errors occur. The cause could be a defect in the manufacturing process or even simply human error. Common mint errors include such examples as a double strike coin. You can seen a good example of this on the second entry. These occur when a struck coin goes back into the press and is struck a second or even third time. The more times a coin was struck the higher the potential value.

A planchet is a blank disc of metal, which could be steel, silver, gold or more, which is created for coinage. An off center coin error is one that was incorrectly centered and part of the design is missing. These errors occurred when the planchet was not inserted into the press correctly. A wrong planchet coin was created when a coin was struck on a planchet meant for another denomination or the wrong type of metal. 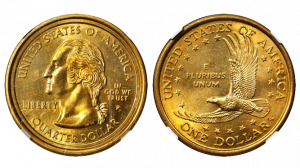 In this example, the obverse design reveals a Washington quarter, while the reverse reveals a Sacagawea dollar. About two dozen of these major errors were struck at the Philadelphia mint. These types of coins are called “mules”…coins struck using two dies intended for two different coins. Mules tend to be the holy grail of error coins because, while some are created intentionally, those that are true errors are exceptionally rare. This coin has sold for at least $31,600 in various auctions and often for a great deal more by private collectors.

This is a “double denomination” error (nickel and penny) and both dates are visible on the coin. You can also clearly see the Lincoln Memorial over-stamped on Jefferson’s face. These coins are fairly rare and sell for upwards of $3000 in various auctions. 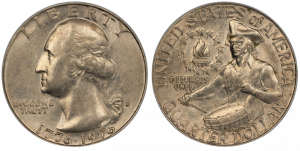 This is a great example of a double struck coin, presented with “off-center” strikes on both sides of the coin. 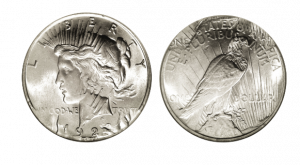 This formed when the coin was struck about 45% off center, but then re-positioned and struck a second time. There are many double struck coins out there, but finding a double struck Peace Dollar is a very rare find. In 2018, an example of this coin sold for over $5,000. It appeals to not only the advanced Peace Dollar collector, but the coin error collector as well. 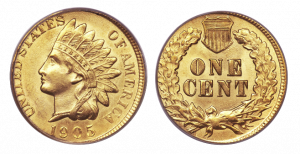 Surprisingly, a gold quarter-eagle planchet was inserted into the cent coining chamber. Due to the magnitude of this error, some numismatists suspect that this error was intentionally struck. It would be surprising for a mint employee to accidentally feed gold planchets into a press fitted with one-cent dies.  It’s far more likely that these were made for a small group of collectors. That said, we likely will never know for sure. This is one of the most valuable mint error coins available, with less than 10 known examples. 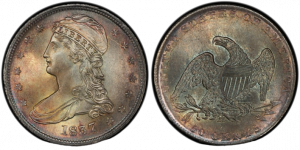 This error occurred when the coin was struck on a large cent, creating a double denomination. This error is fascinating and unique for both its series and date. In 1837, the steam press had been utilized to produce half dollars only a little more than a year and the coin was circulated before being placed into a collection.

This is just a short list of numerous minting errors that have occurred throughout history. Error and misstrikes coins hold a special place in the heart of serious collectors. The appeal includes rarity, unusual appearance and the perspective they provide into the coin minting process. When these coins surface from collections at auction, they typically generate excitement and active bidding. If you are interested in learning more about error coins or misstrikes or trying to source a specific coin, let us know. Blanchard and Company has tremendous reach and respect within the rare coin industry. If there is a particular coin or set that you are trying to build, our experts can help source your coins from collections around the world.

1 thought on “Six U.S. Mint Error Coins You Should Know About”