The 1794 Flowing Hair Half Dime - Blanchard and Company
My Account

The Flowing Hair Half Dime has the distinction of being one of the first coins issued by the US Mint. Designed by Robert Scot, this silver coin, valued at five cents, was part of the Coinage Act of 1792 which established the United States dollar as the standard unit of money in the country. 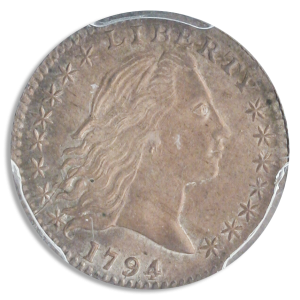 The act also created a decimal system for US currency. In this early phase of the US currency system, officials decided to peg the value of the dollar to the Spanish silver dollar. The act authorized the production of coins ranging from Eagles valued at $10 to pieces as small as half cents.

The half dime was designed to be smaller in both diameter and thickness relative to a dime. The first coins were struck in 1792 in a small quantity of 1,500 pieces.

The piece is part of a family of coins that are considered among the rarest in the world. Consider, for example, the Flowing Hair Dollar which was also minted in 1794 and reached a $10 million selling price in 2013. The coin is incredibly rare. Historians have estimated that no more than 130 are likely to still be in existence. Before this sale, the record for the highest amount ever paid for a coin was $4.1 million in 1999. The coin was only produced for two years. The fifteen stars around the perimeter represented the fifteen states that had ratified the constitution. It was the largest coin in use at the time.

The 1794 Flowing Hair half dime, though not as rare, has similar appeal. Many collectors value the coin because it represents the earliest days of the currency system in the US. Coins from this era have associations to some of the most towering figures in our history. In fact, the 1792 Act to Provide For Copper Coinage carries George Washington’s signature making it official law.

Many aspects of the design of the Flowing Hair Half Dime set a precedent and a standard for all the US coins that followed. The image of Liberty became an enduring theme across all following pieces. Liberty, as a design element, remained. However, the way in which it was represented changed over the decades to more accurately reflect the prevailing notion of what “beauty” resembles.

The 1794 Flowing Hair Half Dime, as well as the other coins of the era, also set composition standards. Coins had proportional values of silver to gold that were 15 to 1 respectively. Silver was deemed to be 1485 parts pure silver to 179 parts alloy copper.

Collectors seek them today as a reminder of the founding of the nation. The Flowing Hair Half Dime remains one of the earliest records of the imagery used to represent the principles of the country.