The Isabella quarter is a rare instance of a commemorative coin that celebrates woman’s industry in a world that gave most recognition to men. 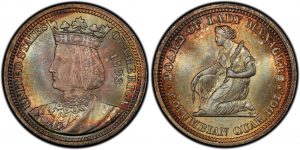 The quarter, struck in 1893, was requested by the Board of Lady Managers of the World’s Columbian Exposition. The Exposition was a world’s fair hosted by Chicago in 1893. The event was a celebration of Columbus’ arrival in the new world in 1492.

From the beginning, the coin was intended to be about women and by women. Socialite Bertha Palmer who was head of the Board of Lady Managers insisted that a woman design the coin. Caroline Peddle earned the job. She was a sculptor who worked for the Tiffany Glass Company.

Unfortunately, there were disagreements between Peddle and the Mint. This led to Peddle abandoning the project which resulted in the mint’s Chief Engraver Charles E. Barber stepping in to lead the design of the coin. Barber created an image of a kneeling woman spinning flax with a spool in one hand. The obverse depicted a profile of Spanish queen Isabella I of Castile. She was selected as the historical figure for the coin because she sponsored Columbus’s journey to the New World.

Minting began in Philadelphia several weeks after the start of the exposition. The total count of coins struck reached 40,023 with the additional 23 retained by the Mint for the purposes of inspection by the Assay Commission.

Total sales reached approximately 15,000 pieces. The Board of Lady Managers purchased an additional 10,000 quarters which, in time, found their way into the market as they passed through the hands of dealers throughout the 1920s.

Today the Isabella quarter is a popular collector’s piece because of it’s unique focus on women and the fact that they were issued only as commemorative pieces and not for circulation.

Despite leaving the project, Peddle went on to enjoy professional success elsewhere. She earned honorable mention at the Paris Exhibition in 1900 for her submitted work. She also designed a memorial fountain for use in Flushing, Long Island. The majority of her work at the end of her career focused on small bronze statues of children.

Bertha Palmer’s contribution to the fair is remembered today as a bold step forward for women. Her dual theme of “Primitive Woman” and “Modern Woman” for the murals at the event were uncommon at a time when men held the most authority.

The Isabella quarter is a must for any collector wishing to build a set that represents the full scope of US history as well as the women who shaped the identity of the nation.