The Coins Honoring Our Founding Father - Blanchard and Company
My Account

“Before there was a nation, before there was a symbol of this young nation — a flag, a constitution, a national seal — there was Washington. Even when in the course of revolutionary events a flag did appear and a Constitution, they did not have a long tradition behind them. But Washington was there, steadying the symbols, lending strength to them instead of drawing from them.” -Garry Wills 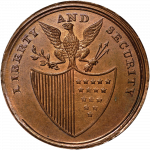 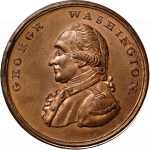 After a long, hard-fought Revolutionary war, the United States and Great Britain signed the Treaty of Paris in 1783. British troops finally left New York City in November, 1783 and in December George Washington resigned as Commander of the Revolutionary Army. America was free to chart its own course as an independent nation, no longer subject to the British monarchy.

Americans and many British sympathizers adored George Washington and wanted to pay homage to the man who wrested control of American away from the British and won freedom for his nation.

Born on February 22, 1732 in the state of Virginia, Washington was a Founding Father of the United States of America, a distinguished military commander who helped win the war by leading troops to significant victories against the British, and our nation’s first President.

“The ultimate significance of George Washington’s life lies in the fact that he singlehandedly redefined our traditional idea of greatness. To his everlasting credit, George Washington was ambiguous about power. The man who could have been king insisted that sovereignty lay with the people, however imperfect their judgment. At the end of the war and again at the end of his presidency, he calmly walked away from power.” – Richard Norton Smith

The Washington pieces were coined from 1783 through 1795 and quickly became popular with both British collectors and Americans. This category includes a variety of coins, tokens and medals, some were even produced in Britain, denominated with a half-penny or cent value.

Most of the high grade examples of each type that have survived were carefully preserved by British collectors. Meanwhile, the many well-worn surviving coins actually circulated in America.

Today, these colonial coins are all very rare and highly sought after by numismatics. Many included patriotic slogans and designs like eagles, shields, and stars, features that eventually were used on coins minted by the U.S. Mint.

Some, like the 1783 UNITY STATES and the 1793 Ship Halfpennies are fairly common. While others such as the Roman Head, dated 1783 and feature a left-facing bust of Washington wearing alternately a Roman toga or a military jacket are extremely rare and highlight sought after.

Collectors still actively seek out the 1791-dated copper tokens denominated ONE CENT. These tokens reveal a flattering and fairly accurate portrait of Washington facing left, dressed in a military jacket. There are two major types of the ONE CENT 1791 token, each display an eagle with a shield upon its breast. The first features the eagle with inverted wings, while the second and rarer type highlights a smaller eagle with its wings raised. Both show the eagle carrying an olive branch in its right claw and a bundle of arrows in its left.

Another popular item are brass tokens featuring the words “SUCCESS TO THE UNITED STATES” on their reverse. The tokens feature a right-facing bust of Washington, in military dress, and they are known in two sizes. Even today, they are generally discovered with little, if any wear, which implies these tokens were sold as souvenirs.

At Blanchard, we’re proud to offer our customers a fine selection of rare, historic coins. We’re confident we can help you find exactly what you’re looking for. Give us a call anytime!

Want to read more great coin stories? Sign up for our newsletter today!