The Enduring 1903 Barber Dime - Blanchard and Company
My Account

In 1891, Congress authorized U.S. Mint Director Edward Leech to redesign silver coins in the country. Chief engraver Charles Barber began the process by hosting a contest and inviting artists to participate. He requested low relief designs and made clear that the winner would be awarded a cash prize. While open to the public, Leech specifically sought out the ideas and artwork of several specific artists. The value of the prize was $500.

This plan was quickly upended when the invited artists explained that they were not happy with the terms set in the competition. 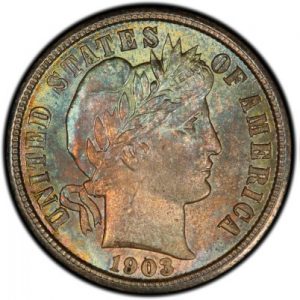 The artists insisted that the judges must consist of a group of peers, rather than government officials. Additionally, they wanted a single artist to design both sides of the coin rather than create a piece that depicts two different styles. Finally, they requested more time for the contest. Leech was unwilling to meet any of these requests. As a result, the artists invited to participate withdrew.

This difficult start to the process only invited more problems. After reviewing the submissions that were received, Leech remarked that they were all “wretched failures.” He continued that “only two of the three hundred suggestions submitted were good enough to receive honorable mention.”

This disappointing outcome left Leech with only one option: he asked Barber to draft the new designs himself. This was a considerable task given that Leech would need a new design not only for the dime, but also for the quarter, and a half dollar. However, even Barber’s work proved unsatisfactory at first and Leech rejected the initial designs. Despite the rejection, Barber continued to work and finally drafted designs that met with Leech’s approval.

Each of the pieces in Barber’s collection show the head of Liberty facing right with a pileus, which is a brimless, felt cap originally worn in ancient Greece. Around this Liberty wears a headband with “Liberty” inscribed on the front.

Despite the beautiful look of the coins the pieces received a tepid response from critics upon their debut. Some of the detractors argued that the coins should show bolder, more original designs that show greater contrast to the previous circulation.

Today the 1903 dimes are an excellent way for enthusiasts to start their collection because the pieces were minted in such vast quantities. In fact, the Philadelphia Mint produced 19.5 million dimes which is greater than the minting of the quarter dollar, half dollar, and dollar combined. For this reason many high-quality, affordable pieces are still available today.