Money makes the world go round.

But, what is money?

That $20 bill in your wallet is money. Throughout history, cowrie shells, barley, even peppercorns have been used as money. Do any of these things actually have intrinsic or real value? One could argue no. 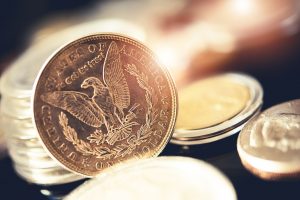 What gives things like paper money, the $5, $10, and $20 dollar bills you get from the bank value? It’s the backing and promises by the U.S. government that this has value. Essentially, American society is built around the agreement that this paper money has value.

For the vast majority of human history, however, people relied on gold and silver as money.

The traditional definition of money states that it is a:

“Precious metals seemed to serve all three needs: a stable unit of account, a durable store of value, and a convenient medium of exchange,” according to an International Monetary Fund blog post.

Precious metals are hard to obtain. There is a finite supply of them in the world. They stand up to time well. They are easily divisible into standardized coins and do not lose value when made into smaller units. In short, their durability, limited supply, high replacement cost, and portability made precious metals more attractive as money than other goods, the IMF said.

Gold coins were first created by King Croesus of Lydia, now part of Turkey, around 550 BC and circulated in many countries before paper money was created.

When paper money was first printed it was tied and backed by gold.

As the American economy developed, a strong tradition of gold as money unfolded.

In 1933, a financial crisis spurred Americans to convert their paper money for gold, which sparked a massive outflow of gold from the Federal Reserve.

In March 1933, the Federal Reserve Bank of New York could no longer honor its commitment to convert paper money to gold and President Franklin D. Roosevelt declared a banking holiday.

Ultimately, President Roosevelt issued an Executive Order requiring all Americans to surrender all gold owned by them to a Federal Reserve bank and prohibited the private holdings of all gold coins and bullion.

Blanchard and Company has deep roots in gold’s history in America.

Decades after President Franklin D. Roosevelt prohibited private U.S. citizens from owning gold, one of our company’s founders – Jim Blanchard – rose to prominence as a supporter of American’s right to own gold in the early 1970s.

He gained national attention when he arranged for a biplane to tow a banner proclaiming “Legalize Gold” over President Richard Nixon’s inauguration in January 1973.

His lobbying efforts were a success and after more than 40 years, Congress once again legalized private ownership of gold bullion effective Dec. 31, 1974. Once the gold restrictions were lifted, Blanchard founded our company in 1975 and helped build it into of the nations largest and most respected tangible asset investments firms.

Owning gold and other precious metals makes as much sense today as it did a thousand years ago, perhaps even more so given the changes that have occurred on a governmental and monetary policy level. Diversification in tangible assets makes sense for all investors for a small portion of their portfolio in order to preserve and grow wealth.

As history shows, gold was the world’s first currency and may remain the only true currency available today. Why own it? Check out this compelling research from Penn State University professors on how gold improves portfolio performance, download it free here.