American coinage often follows a strange path. Each piece minted has a unique, twisting history. This characteristic is especially true of the 1858 three-cent silver piece. The coin has origins in the most unlikely place: the post office. 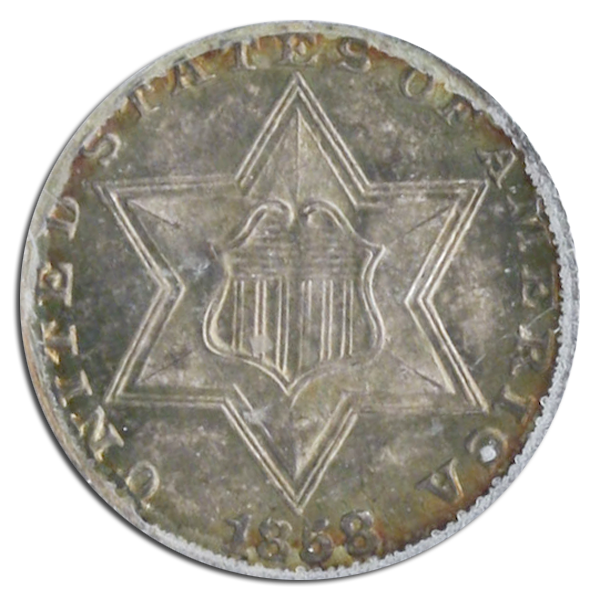 In early 1851 congress began discussing reducing the cost of postage from five cents to three cents. Not long after officials proposed a formal bill to support the minting of a silver, three-cent piece.

While the decision was congruent with the move to change postage rates, historians often note a more important characteristic of the coin: it marked a first for the U.S., as the coin was the first silver piece to consist of a metal that was worth less than the face value.

Previous silver coins were .900 fine. This piece was .750 fine, consisting of three parts silver to one-part copper. In his book Fractional Money: A History of Small Coins and Fractional Paper Currency of the United States, author Neil Carothers writes that “the new piece was the first silver coin in the history of the United States that was not legal tender for an unlimited amount.”

The design of the coin was practical. The simple, uncomplicated imagery accounted for the small size of the piece. One side shows a star with the shield of the Union inside. The reverse side shows an ornamental letter C with the Roman numeral III inside. Thirteen stars form a circle around the edge. Later versions of the coin would include olive branches above and below the Roman numeral. After designing the piece, the coin entered production that extended into three phases:

The Philadelphia Mint struck 5,446,400 pieces in 1851. At the same time officials struck an additional 720,000 in New Orleans. Public reception was not favorable. Many believed the coins were too small and easily lost.

The US government decided to increase the composition to .900 silver. The impetus for this change was a desire to push Spanish silver coins out of circulation. This change, however, meant that the government had to purchase large quantities of silver for minting. The 1858 coin represents the largest minting with a total of 1,603,700 struck.

The final phase of production occurred before, during, and after the civil war. During the war the government introduced legal tender notes backed only by faith in the credit standing of the government rather than a precious metal.

In time, production ended because the U.S. no longer had a need for the coin. Many pieces from the 1863 production and after were retained by the treasury and ultimately melted after officials decided to cease minting.

Today, the coin’s value varies greatly based on year and condition. One extreme end of the spectrum is an 1851 proof of the three-cent piece which sold in 2012 for $172,500. This particular coin is the only known of its kind in existence. Collectors value the history of the coin and the role it played during a long, and formative period of US history.