Third Time's a Charm - Blanchard and Company
My Account

It took Congress three separate attempts – over a span of nearly 60 years – to approve the striking of a 2-cent coin. 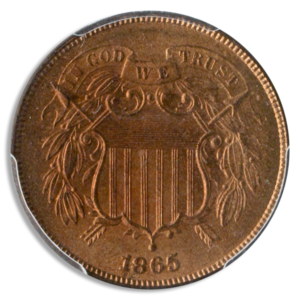 In the spring of 1806, Senator Uriah Tracy from Connecticut first introduced legislation to authorize the U.S. Mint to strike a two-cent coin.

Not everyone liked the idea.

Concerned about fraud, Mint Director Robert Patterson used his political might to stop the plan.

To illustrate his concerns, Patterson sent a brass button alongside two of the composite blanks for the proposed 2-cent coins to Senator Tracy to show how easy it would be to swap a button in the place of the proposed coin.

If at First You Don’t Succeed…

The Mint Director stepped in. Again.

Robert M. Patterson had taken the helm of the U.S. Mint – the son of Robert Patterson who had stalled the initial attempt back in 1806. Father like son! The young Patterson was also able to stop the 2-cent coin from becoming a reality.

The onset of the Civil War in 1860 created a dramatic coin shortage throughout the divided nation. Citizens hoarded coins. The Treasury Department responded by issuing paper fractional currency – in denominations of 3, 5, 10, 15 and 25 and 50 cents to replace the nation’s silver coinage.

Congress passed the Act of April 22, 1864, which – after three tries – finally passed into a law a provision to create a bronze two-cent piece.

The 2-cent piece was the first coin to sport the motto IN GOD WE TRUST, backed by the support of Treasury Secretary Salmon P. Chase.

First minted in 1864, the 2-cent coin appeared as an initial success as the coin-starved public began to use and circulate the coins.

Yet, once the Civil War ended and regular coins reappeared in circulation, usage of the 2-cent coin dropped precipitously.

In the end, the short-lived circulation of the 2-cent coin was an experiment that failed.

The 2-cent coins were minted only from 1864 through 1873. These unique coins were greatly influenced by politics and war.

In 1865, the Confederate surrender ended the deadliest and most divisive war ever fought on American soil. Nearly 620,000 soldiers were killed, millions more were injured. We have a 2-cent coin from 1865, one of the most pivotal years in U.S. history.

You can see the intricate beauty of this historical masterpiece here.